Forgotten Ones of the 2000s: San Diego Padres

The San Diego Padres broke their 13-year playoff drought in 2020, and have spent the entire offseason building off of that 2020 success. With their combination of newly-acquired and homegrown starting pitching, a lineup featuring Manny Machado and Fernando Tatis Jr., and a strong farm system that still ranks as one of the best in the league, the Padres have managed to put together a championship-caliber team.

That 13-year playoff drought, however, should be an indication that the Padres have had a rough past. In their history dating back to 1969, the Padres have made the playoffs only six times. They have won five division titles, none of which led to anything positive. They were the National League representatives in the 1984 and 1998 World Series but did not emerge victoriously. Half of their playoff appearances have come since 2000, but they finished with a 3-10 playoff record during that time. Hopefully, the incredible offseason the Padres had leads to a successful next few years. For now, let’s take a look back at the past 20 years and look at five Padres’ performances you may not remember:

Two years removed from their 1998 World Series appearance against the heavily-favored Yankees, not much was going for the Padres. San Diego legend Tony Gwynn was nearing the end of his career. Despite the acquisitions of Gold Glove second baseman Bret Boone and veteran Ryan Klesko, the Padres found themselves in last place. In 2000, they were the only NL West team to finish below .500. Hitting-wise, the Padres were at or near the bottom of the league in nearly every offensive category.

Klesko and third baseman Phil Nevin formed a solid corner infield, and each produced solid seasons. However, an unlikely figure joined them in the form of outfielder Eric Owens. Owens was never known for his offense during his time with the Reds and Brewers but was known for his versatility in the outfield. He even spent some time at first base, second base, and third base. The 1999 season was Owens’ first full season, but the 2000 season is where he broke out. The career .264 hitter hit .293 with a .346 on-base percentage, both career-highs. Owens scored 87 runs, recorded 171 hits (both career-highs), and stole 29 bases. Owens also set career-highs in at-bats and plate appearances, leading the Padres in both categories that season. Defensively, Owens did not record a single error in the outfield and had six outfield assists. The 2000 season gave fans a glimpse of what Owens could do. The Padres, however, traded him to the Marlins prior to the 2001 season, and Owens never regained the same form.

The Padres began the new century with four-consecutive losing seasons. In 2004, the Padres produced a winning season but failed to return to the playoffs. Despite a record of 82-80, the Padres won the NL West in 2005, their fourth division championship in franchise history. Their 82 wins were tied with the 1973 Mets for the fewest wins needed to win a division title. The next season, the Padres improved, even more, winning another division championship with an 88-74 record. Though they still weren’t a great offensive team, they were very speedy. The Padres were fourth in the National League with 123 stolen bases. 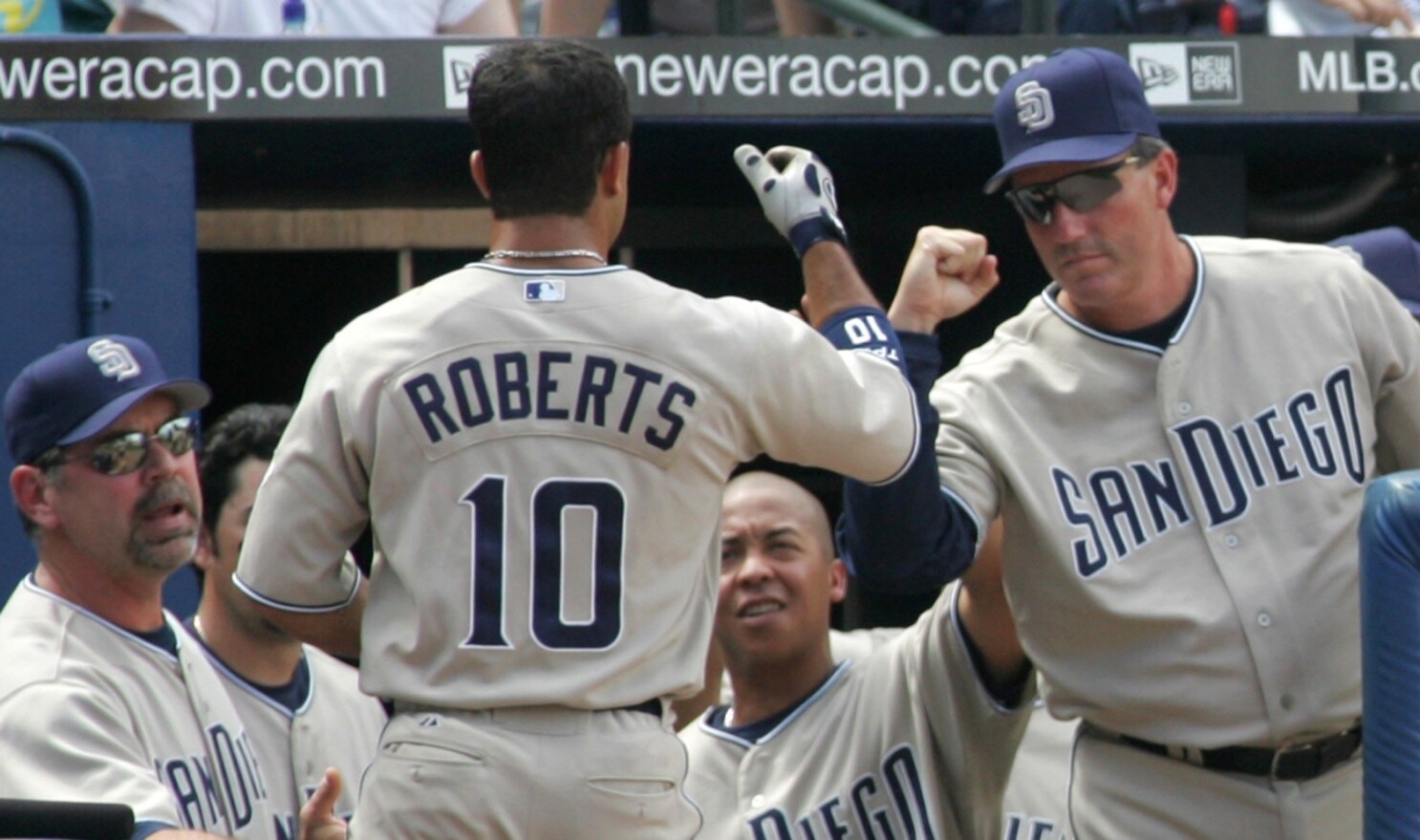 Three members of the Padres stole 20 or more bases, one of them being outfielder Dave Roberts. Obviously, Roberts is well-known with Red Sox fans for his contributions in the 2004 Postseason. Dodger fans may know Roberts from his three seasons with them as a player and…as their manager since 2016. Roberts also had a short stint with the Padres and was able to get more playing time in 2006. The then 34-year old Roberts set career-highs in games played, at-bats, plate appearances, runs scored, hits, triples, batting average, and on-base percentage. Roberts stole 49 bases, four more than his previous career-high set in 2002. Roberts served as the Padres’ primary leadoff man throughout the season and wound up putting together his best season. Despite an NLDS loss to the eventual World Series Champion Cardinals, Roberts had no issues getting on base. He hit .438 (7-for-16) in the four games of the series. Unfortunately for Roberts, his best season turned out to be his last fully effective season. His numbers diminished in 2007 and 2008 with the Giants, and by 2009, his playing career was over.

In 2007, the Padres once again found themselves in the hunt for a division championship. Unfortunately, the season didn’t end how the Padres envisioned it would. There was heavy competition for both the NL West and the NL Wild Card. The Padres had to contend with the Diamondbacks and the Rockies, as well as the Phillies, Mets, and Cubs. The Padres held the division lead for 52 days during the season, but the Diamondbacks wound up taking control of the lead and held them off to win the division. Meanwhile, the Mets endured a collapse of their own and eliminated themselves from the race with a dismal final three weeks of the season. The Cubs and Phillies wound up winning their respective divisions, which left only the Rockies to contend with. The Padres put up a respectable 15-13 record in September, but the Rockies exploded with a 20-8 September to catch them and force a tie-breaker game for the NL Wild Card. The Rockies wound up winning that game in 13 innings, eliminating the Padres from playoff contention. 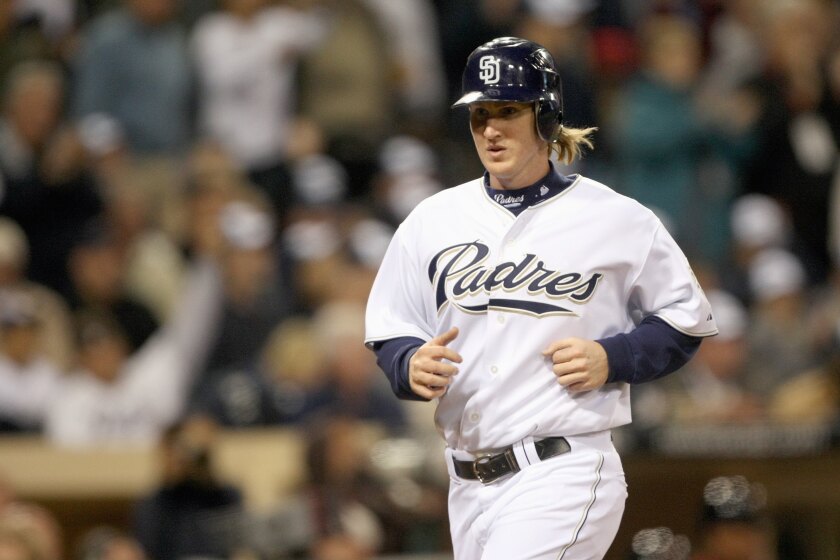 The Padres were lead by Hall of Famer Greg Maddux, Cy Young winner Jake Peavy, Chris Young, and Adrian Gonzalez, but were also joined by Khalil Greene. Greene was a Rookie of the Year candidate in 2004, but his best season came in 2007. He set career-highs in games played, at-bats, plate appearances, home runs, and runs-batted-in. Greene’s 3.5 WAR led Padres hitters and was just behind Chris Young’s 3.6 for second-best on the team. Greene finished the season with 44 doubles and 286 total bases. Defensively, he was fifth in the NL in putouts and third in assists among shortstops. Greene is currently the Padres all-time home runs leader among shortstops. Unfortunately, Greene’s career was derailed due to suffering from a social anxiety disorder, and he was never able to recover his 2007 form.

Back-to-back last-place finishes followed the Padres, but by 2010, they were back in contention for the NL West. The Padres this time had to contend with the Giants and wound up dominating their season series against them (12-6 record). Ultimately, the Giants won the war, and the Padres finished only two games behind them after a late-season collapse.

The Padres bullpen was dominant in 2010, which is why the Padres finished with the second-best team ERA in the NL. Their starting pitching staff was surprisingly good as well, specifically the top three of their rotation. Behind Clayton Richard were veteran Jon Garland and a 22-year old Mat Latos. Garland enjoyed a bounce-back year after a disappointing stretch with the White Sox, Angels, and Dodgers. In his one season in San Diego, Garland went 14-12 with a 3.47 ERA (career-high) in 33 starts. Though his walk rate rose, his 136 strikeouts were a career-high. Garland also reached the 200-inning mark for the sixth time in his career. 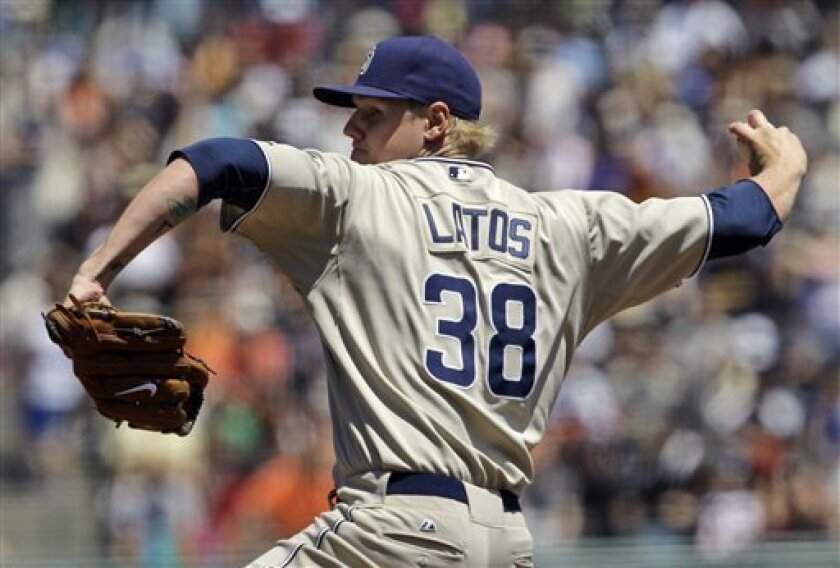