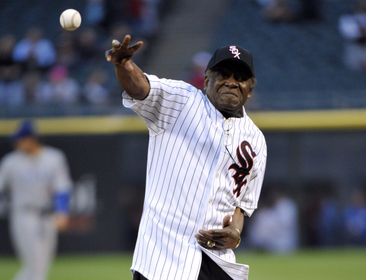 Although Minnie Miñoso made his Major League debut with the Cleveland Indians in April of 1949, he spent the previous two seasons with the New York Cubans of the Negro League. After Jackie Robinson broke the color barrier in baseball, Miñoso was the first black player from Latin America to play in Major League Baseball.

In his first three seasons, Miñoso only played in 17 big-league games, spending the rest of the time in the minor leagues. He was acquired by the White Sox via trade in 1951.

Miñoso played 12 seasons in Chicago through various stints. In addition, he spent time with the St. Louis Cardinals and the Washington Senators and had a second stint with the Indians.

Miñoso was a nine-time All-Star and three-time Gold Glove award winner. He led the league in triples and stolen bases three times apiece. His unique batting stance also allowed him to lead the league in the number of times being hit by a pitch.

Every winter from 1945 to 1961, Minoso went home and played for the Cuban League with whom he posted a career .279 batting average. From 1965 to 1973 Miñoso played in the Mexican League, where he hit .317 through his career there.

In 1976, Miñoso signed with the White Sox and played three games at age 50. He did it again in 1980, playing in a pair of games at age 54. His attempt to join the team in 1990 to make an appearance in a sixth decade in Major League Baseball was rejected by then-commissioner Bud Selig. Thus, he remains one of only two players to play five different decades in the majors (also Nick Altruck).

Between the Negro Leagues, Major League Baseball, Mexican League, Cuban League, and a pair of appearances (1993 and 2003) with the St. Paul Saints of the Independent League, the Cuban Comet played professional baseball in an unprecedented seven different decades.