A Complete Breakdown of the Astros' #BuzzGate

What an unbelievable day in the world of baseball. In the aftermath of the Houston Astros cheating punishments, AJ Hinch was fired by the Astros, Alex Cora has stepped down from the Boston Red Sox manager job and Carlos Beltran did the same with the New York Mets. That’s when the world of baseball collapsed.

Pretty crazy news in itself. What’s crazy is within 15 minutes, no one was talking about this. shortly after the Beltran news, these tweets surfaced.

This person has claimed to be Beltran’s niece. Which is like “yeah sure buddy.” But look at these older tweets from this account.

These tweets were posted on Oct. 29th. Beltran was announced as the Mets manager on Nov. 1st.

Now obviously the Beltran’s would never come out and say “yeah, she is one of us and she has been correct with everything that she is saying”, that would be lunacy. But check the timing of the alleged Niece’s tweets. They were before the announcement of Beltran becoming the new manager. Before any of this noise, before anyone would try to create a fake account for attention.

This account also told us the day before that Beltran was stepping down.

By the way, just to flex, I knew without looking up that tio means uncle in spanish. All this adds credibility to this alleged niece of Beltran. I’m not saying that this is definitively a family member, but the odds of this being an absolute wild fake account is pretty low.

So, to go back to the start, she claims that Jose Altuve and Alex Bregman (and probably others) were using devices that buzzed to indicate pitches. We remember the video with the banging of the trash cans to indicate an off-speed pitch or fastball.

This is clear as day, even the Chicago White Sox figured it out. I never saw this next video until I stumbled upon it on YouTube today. It’s clear that teams have figured out this trash-can banging thing, so the Astros improvised. In the 2017 World Series, they used a whistle system.

So now every team has figured this out. the first to accuse the Astros, my boy, Trevor Bauer.

If only there was just a really quick way to increase spin rate. Like what if you could trade for a player knowing that you could bump his spin rate a couple hundred rpm overnight…imagine the steals you could get on the trade market! If only that existed…

2018….. Bauer was very vocal about the Astros cheating after they swept the Indians in the 2018 ALDS. Everyone brushed this off until actual hard evidence came out.

This tweet was from yesterday. Obviously, Bauer is heavily connected within the league. He told us two years ago, but we didn’t listen. There is a reason I’m a huge Trevor Bauer stan.

But yeah, this is just word of mouth. There is no real evidence. Well……… 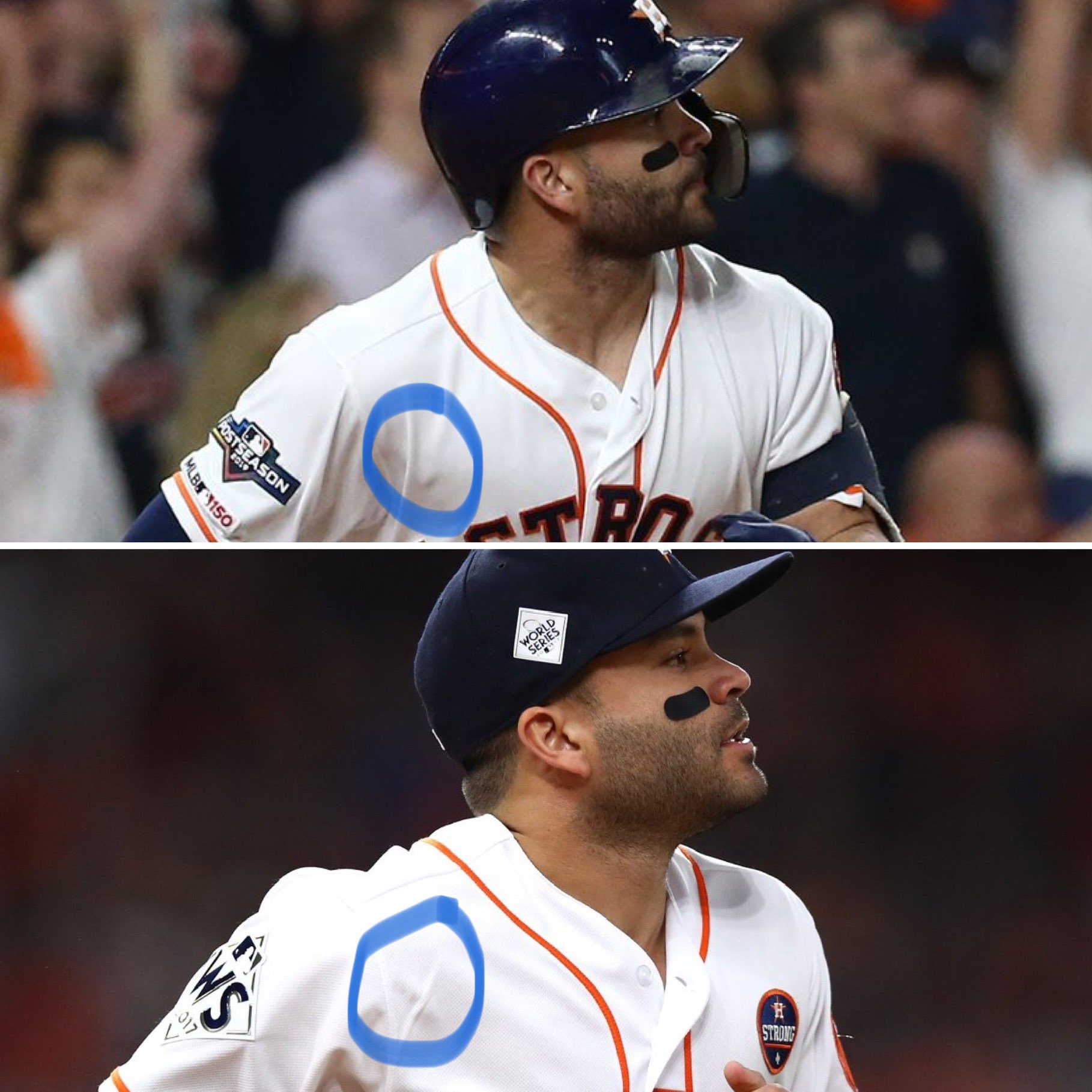 The top picture was during his 2019 ALCS game six walk-off, the bottom was from the 2017 World Series. Also, notice who tweeted the bottom tweet. That is so clearly not a crease in his jersey. Like not even close. That’s some sort of device. I have not found a similar picture for Bregman but I’m sure more evidence will come up in the next few days.

And yes, I have seen the Josh Reddick Photo, but that is clearly confetti stuck to his body. I have too many pictures and clips in here already to waste space with it. Here is a link if you want to check it out.

But this video after the walk-off is pretty damning. Altuve was telling the Astros not to rip his uniform off and then clutched his jersey so it wouldn’t be ripped off.

Here's Ken Rosenthal, who broke the news of the Astros cheating scandal, asking Jose Altuve why he was telling teammates not to rip his jersey off after the walk-off home run in Game 6 of the 2019 ALCS: pic.twitter.com/xoBGX159QG

So after you win a league championship, you put on the fresh new gear. Usually right on the field and then you go to your interviews and then the trophy presentation. Not our boy Altuve.

Why do other Astros put their shirts on over their jerseys but Altuve sprints to the clubhouse to take off his jersey and put his new shirt on? Perhaps to ditch the device because he knew he would be getting all the attention?

The Astros may have just set a trend. I can all but guarantee you that all MLB teams cheat in some way. Not as severe as the Astros, but they all bend the rules. The New York Yankees have been rumored to have bullpen cameras and to mess with opponents’ bullpen communication. Not to single out the Yankees, but that is just one of the rumors out there.

To wrap this up, Here is David Brosius, the son of former Seattle Mariners’ third-base coach on his Instagram.

Notice the bottom reply by him. That’s an interesting little tidbit. But the evidence is clear. The Astros not only cheated, but they absolutely used every resource to cheat. They needed to win a World Series with all that talent and they went all in, by any means necessary.

More info will come out in the next few days and the MLB might re-open this Astros case. I wrote an article last year about how boring the offseason was. This has been one of the biggest cheating scandals in the history of not only baseball but all of sports.

Buckle up people, I think this is just getting started.