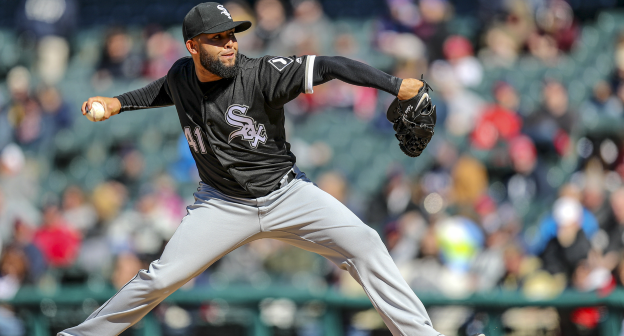 Like Greene and Smith before him, the Boston Red Sox could be looking to bolster the back-end of their bullpen with a potential acquisition of right-handed flamethrower Kelvin Herrera.

Ever since the demise of the “mighty” Kansas City Royals after the 2015 season, it seems as if there’s a noticeable pattern every summer: The Boston Red Sox and Kelvin Herrera are linked in trade talks.

This began back in the 2017 season, but Boston opted for the statistically better option of Addison Reed at the deadline. Herrera stayed in Kansas City, where he finished the year 3-3 with a 4.25 ERA, while converting on 26 saves in his 64 appearances for the 80-82 Royals.

Then came 2018. The Royals traded Herrera, but it wasn’t to Boston. In fact, the Red Sox never even called Royals GM Dayton Moore regarding the righty who, at the time, was in the midst of a career year for one of baseball’s worst teams. Herrera wound up in the Nation’s Capital, where he struggled to find consistency, posting a 4.34 ERA in his 21 outings there.

However, it shouldn’t come as a shock that Boston was among the teams that should’ve been interested in the 29-year-old’s services when his contract expired after last season.

Herrera did sign with the Sox on Jan. 7, it just wasn’t the Red Sox. The White Sox signed him to a two-year, $18 million deal in hopes it would better the odds to sign top free agent Manny Machado.

Why should the Red Sox want him?

At the worst, he replaces the 7.71 ERA posted by Tyler Thornburg. However, whenever Herrera has been in a winning situation, he’s been one of the best relievers in baseball. From 2014-2016, when the Royals were a team vying for a playoff spot and even winning a World Series, Herrera made 214 appearances. Over that stretch, he posted a 2.30 ERA and averaged 8.8 K/9.

Herrera still has the talent to be one of the best relievers in the game, and the Red Sox should jump at the chance to buy low on one of the game’s top arms.

Where does he fit in best with Boston?

Considering he’s not a true closer, Herrera likely will settle back into the setup role he was given to bridge to Wade Davis back during the height of the Royals power. This gives Alex Cora a true eighth inning guy to bridge to Matt Barnes as the closer for this team.

That being said, Herrera has closing experience, so the “bullpen by committee” strategy adopted by Alex Cora this season doesn’t necessarily have to go away.

What would it take to get him?

Remember Jay Groome? The Red Sox selected him with the 12th pick in the 2016 draft, and were able to will him away from going to college. However, he hasn’t pitched since 2017 due to injury. And the last we saw of him was his 3-7 record and 6.70 ERA through 11 starts for Greenville. Combine that with the reports of character issues that came with him on Draft Day, and it seems like a player you can trade.

Nick Lovullo started his Pawtucket career pretty well, but has otherwise struggled this year between Portland and Pawtucket. He is hitting under .200 at both levels; and playing a middle infield position, it doesn’t seem like a spot at the MLB level is opening up for him any time soon.

The White Sox have Tim Anderson at shortstop, but Yolmer Sanchez isn’t exactly setting the world on fire at second. There could be a spot for Lovullo in the Windy City.

As for the addition of cash coming back to Boston? Herrera isn’t pitching to a level worthy of eating $9 million per season. Chicago would be forced to sell low, or hang on to the underperforming right-hander. By selling low, they’d be forced to pay at least half of his salary for the 2019 season.