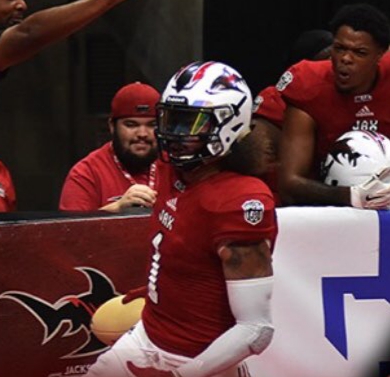 The Jacksonville Sharks hosted the Columbus Lions at the VyStar Veterans Memorial Arena Saturday night. It was the final meeting between the two teams this season.

Durron Neal, who was playing against his former team, caught seven passes for 70 yards and two touchdowns in this game. Devin Wilson added six catches for 95 yards and one touchdown.

Sharks quarterback Jonathan Bane threw for 228 yards and four touchdowns. Defensive back Seth Ellis had a season-high two interceptions in this game. Zack Brown scored three total touchdowns – two rushing, one receiving – and recorded two tackles for a loss on the defensive side of the ball.

Columbus kept it close, but in the end, it was the Sharks who came out victorious with a 49-41 win. The win is their sixth in a row and completes the season sweep of the Lions.

The Sharks will travel to Greensoboro, NC next weekend to take on the defending champion Carolina Cobras at the Greensboro Coliseum. Kickoff is set for 7 p.m. ET.