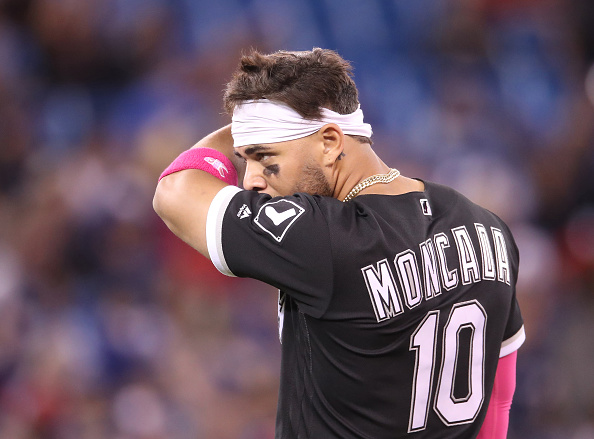 Welcome to the first edition of my “Top 10 Plays of the Week.” We will look at phenomenal plays from all over the league every week. Feel free to DM me your submissions on Twitter @giodamico15 or on Reddit @giodamico15. Let’s get into it.

Yes, I used Matt Chapman as an example, not Nolan Arenado. He’s the better fielder, get over it. It’s never easy to make a tough throw in the rain and David Fletcher‘s speed didn’t make it easier for Asdrubal Cabrera, but he put enough juice on the throw to nab Fletcher.

Yes, you read that right. Yoan Moncada fielded a missile at third and made a heads up play. Check it out.

#7. Aledmys Diaz does the electric slide

Juan Soto did something similar this week, but he had help from teammate Victor Robles. Diaz had no help and made an extremely athletic play at the plate.

What a freaking slide pic.twitter.com/r7BItnvfYd

#6. Carlos Gomez proves himself once again

Gomez hit a clutch three-run home run this week to propel the Mets to a victory, and now he’s robbing Dawel Lugo of a base hit. Are you not entertained?!

We all know that Urshela can field, but did you know how strong his arm was? Oh, you did? Well, just watch the video anyway.

#4. Billy Hamilton does what he does best

Hamilton will probably never be known for his hitting ability, but you know what he can do? He can run. Fast. He can also field very well. Put these two together and you get this video of him robbing Clint Frazier.

Rowdy Tellez looked as though he got all of this ball that Yonny Chirinos threw, but Kevin Kiermaier had something to say about that.

Kevin Pillar goes full superman extension to make this insane catch in right field… but that’s not all. This diving catch turns into a double play. Check it out.

#1. Duggar had no business making this catch

Is Steven Duggar the new Superman? Did he just show up Kevin Pillar? I’m not sure. Kevin Pillar’s play and Duggar’s play were on the same exact level for me, so I gave the edge to Duggar.

I’m aware that I definitely missed some great plays, but that’s why I need YOU GUYS to DM me @giodamico15 on Twitter and Reddit with your submissions for plays of the week. Congratulations to every player who cracked the list on being good at baseball.

Why Ryan Preece Could Be the Next Great Driver