Should the HEAT pursue Bradley Beal this Summer? 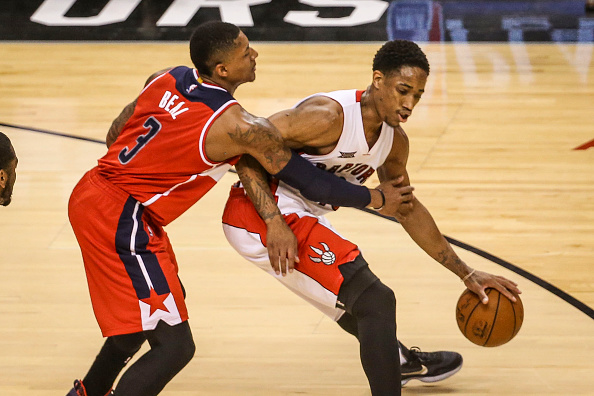 What the Heat really need are AOT players— like the recently retired Dwyane Wade. This year’s free agency class is expected to have plenty of them with Kawhi Leonard, Kyrie Irving, and Kevin Durant all expected to enter free agency in July. Unfortunately for the Heat, unless they do some serious cap maneuvering, they won’t be able to enter the chase for those players.

With the Heat stuck due to their salary cap situation, their best bet may be to acquire a star through trade. As many Heat fans know, Riley has a history of pulling off blockbuster trades. Moreover, he’s also shown a willingness to go all-in for the right star. He did it in 1995 when he acquired Alonzo Mourning and in 2005 when he landed Shaquille O’Neal.

One star who could be available this off-season is Washington Wizards all-star guard Bradley Beal. This past February, Greg Slyvander of the Miami Heat Beat reported the Heat were heavily interested in the all-star guard. And that’s very unlikely to change.

Heat have heavy interest in Bradley Beal via ⁦@Lefty_Leif⁩

The Wizards are currently in salary cap hell with John Wall‘s supermax deal beginning next season. With Wall out for most of next season recovering from a torn Achilles, the Wizards are likely stuck with his contract. Beal, on the other hand, would net a far bigger return. The all-star shooting guard is set to make $27 million in 2019-20 and is signed through 2021. While defense isn’t the guard’s strong suit, Beal’s offensive potential is very high as he enters his prime, and his ability to play both guard positions makes him a desirable asset in the trade market.

If the Wizards decide to move Beal, any Heat offer likely would need to begin with at least two among Justise Winslow, Bam Adebayo, and Josh Richardson plus the No. 13 pick and maybe a cap filler. While it may seem like a steep price, it’s the kind of package that’s required for a star player, which Beal certainly is.

However, with Beal hitting free agency in 2021, it might be better to wait. In the summer of 2021, the Heat are expected to have enough cap space to land two-star max players in a deep free agency class. Additionally, they’ll still keep the young core of Winslow, Richardson, and Adebayo intact. It’s a very intriguing option but will require two more years of patience.

The question is will Riley wait.

Why Kyrie Irving should take his talents to Los Angeles

Philadelphia 76ers: Searching for Their Next Iverson

Denver’s Abundance of Talent and Finite Number of Minutes