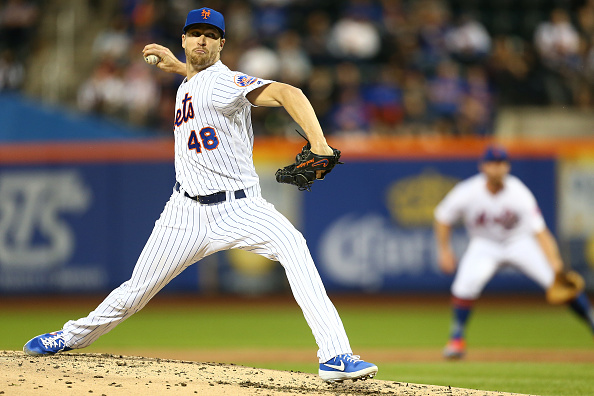 Another weekend is upon us and we get to kick it off with plenty of baseball. 15 games all toll on the MLB schedule. Top tier pitching will likely be paid up for so value plays today will be very important to target. Let’s get right into it and go Around the Horn!

We kick things off with the most obvious selection in Jacob deGrom. deGrom will look to continue his dominance over the Miami Marlins. In two starts versus the Marlins this season deGrom is a perfect 2-0 with just a single earned run given up in 14 innings pitched. deGrom is averaging 37.8 DKpts against the Marlins who are striking out at the eighth highest rate this season at 25.2%.

Correa and the Astros are in a prime spot at Fenway tonight versus the very “average” Rick Porcello who has a 5.15 ERA and 1.47 WHIP on the season. Correa in a very limited sample is 3-for-8 off of Porcello, recently Correa has been borderline dominant, 9-for-22, 1 HR and 5 RBI. Some sort of an Astros stack here is a great strategy, they are hitting .271, with a .809 OPS in 107-lifetime at-bats.

First off be sure to make certain Perez gets the nod behind the plate versus the Baltimore Orioles and right-handed starter Dylan Bundy. It certainly seems like a start for Perez is warranted, Perez in his last five games is 6-for-15 and is averaging  12.4 DKpts per game over that span.

Brantley tonight will be difficult to pass up even at this somewhat high price. (George Springer will cost you $5,800 and is a great play as well). Brantley has some really good BvP numbers versus Porcello. He is 11-for-39 with 6 RBI and a .836 OPS. Brantley has been an absolute stud to date for the surging Astros hitting .329 with a .954 OPS in 43 games this season.

Not only does Buxton get a match-up against a left-handed pitcher tonight but he also goes into the game with a very nice six-game hitting streak. He has also gone deep in two consecutive contests. Buxton, the former number two overall pick in 2012, is finally putting it all together for the Twins. On the season Buxton is hitting .282 with an OPS of .857 with eight steals and 22 runs scored in 40 games.