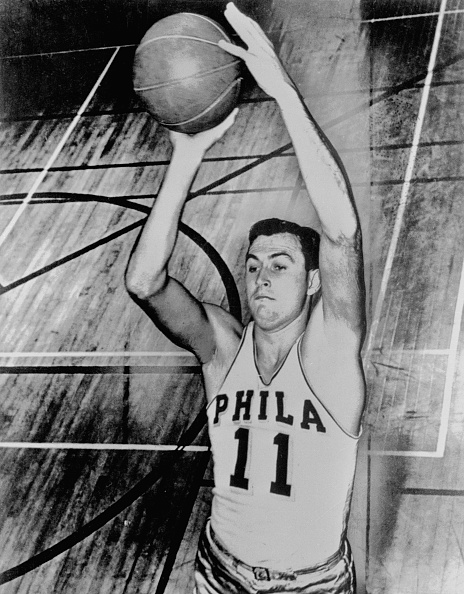 It’s Thursday and you know what that means – time for a throwback article! This week we will be taking a look at the career and legacy of Paul Arizin.

Paul Arizin had somewhat of a slow start to his playing career, waiting until his senior year to try out for his high school team and failing to do so. He would, however, hone his skills playing on intramural and church teams. It is believed that he played on as many as six or seven teams at one time, sometimes having multiple games in a single night. Arizin was once asked where he found the energy to play for multiple teams, saying, “I just did it because I loved to play.”

It was during this time that Paul would become the pioneer of the jump shot, even if he did say the method came about by “accident.”

“Very often when I tried to shoot on those floors, I would slip. I found that by leaving my feet when I shot I could avoid slipping… The more I did it the better I became.” — Paul Arizin

The jump shot would become his go-to scoring move and earn him the nickname “Pitchin’ Paul” because his shot had hardly any arch and resembled an almost line-drive style release. This was mostly due to the fact that many of the places where Arizin’s games were held at had low ceilings and putting too much of an arch on the shot release would cause the ball to hit the ceiling.

In 1946 as a freshman at Villanova, Arizin would get his big break by way of Al Severance. Severance was the coach of the men’s basketball team at the university and had seen Pitchin’ Paul playing intramural basketball. Severance was so impressed with Arizin that he offered the freshman a scholarship to play for Villanova, unaware he was already a student at the school.

The following year Paul Arizin would join the Villanova Wildcats. His college career would get off to a slow start, going scoreless through the first several games at the start of the 1947 season. By the end of the year, Arizin was the teams leading scorer and the team finished with a 15-9 record.

By his senior season, Paul Arizin averaged 25.3 points per game, leading the country and good enough for the second highest single-season scoring average ever, at the time. Arizin was named the College Player of the Year by The Sporting News for the 1949-50 season. Villanova would later retire his jersey and no one else would ever wear number 11 for the Wildcats.

Pitchin’ Paul would get drafted with the first pick in the 1950 NBA Draft by the Philadelphia Warriors. His rookie season he averaged 17.2 points and nearly 10 rebounds per contest, finishing in the top 10 for both categories.

Arizin would retire from the NBA following the 1962 season, deciding not to move to San Francisco with the Warriors.

Following his NBA career, Paul Arizin would spend three seasons in the Eastern Professional Basketball League (EPBL) with the Camden Bullets. During that time he would be named EPBL MVP (1963) and help lead the Bullets to the 1964 EPBL Championship, winning his second professional championship. He would average at least 20 points per contest each season in the EPBL.

Pitchin’ Paul left a mark on the game of basketball that has become engrained in the sport at every level. The jump shot changed the way people played basketball during Arizin’s time and continues to evolve into the “three-point” era. The creator of the jump shot and one of the first elite scorer’s in league history, his legacy will live on forever.

“You wouldn’t want a better outside shot than our Paul Arizin.” — Wilt Chamberlain

Rodney Rogers: The Man who One-Upped Reggie Miller’s “8 Points in 9 Seconds” As a Rookie