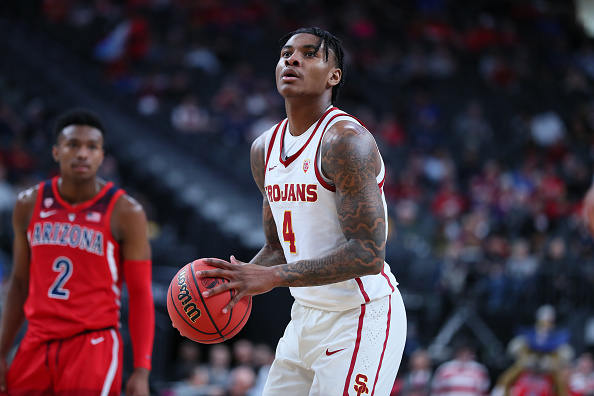 As expected, the Miami Heat remained with the 13th pick in what was a wild draft lottery. Once the lottery ended, multiple sites immediately updated their mock drafts. A name that’s been linked to the Heat on most mock drafts: University of Southern California’s Kevin Porter Jr.

The Southern California shooting guard averaged 9.5 points on 47.1 percent shooting and four rebounds in 21 games as a freshman this past season. At 6-foot-6, the guard has flashed doses of shot-making skills and raw athleticism. However, there are off-court concerns, as the guard was suspended last season for “conduct issues.”

Two popular sites that have him going 13 are Bleacher Report and Sports Illustrated.

“Most every team is well aware of Porter’s impressive gifts as a ball-handler and athlete, and there’s only so far he can really be allowed to slip on draft night,” Sports Illustrated’s Jeremy Woo wrote. “But he’s going to require some significant nurturing to reach his potential, as teams continue to hold concerns about how seriously Porter approaches the game and whether he’s ready to handle being a professional. He would be a fit with an organization like Miami that trusts its internal culture and has been unafraid to take risks.”

On his Porter-to-the-Heat pick, Bleacher Report’s Johnathan Wasserman wrote: “Time, pro coaching and improved confidence could help unlock obvious talent with the explosive 6-6 wing. Porter will require patience from the Miami Heat, as he’ll struggle early with his decision-making and getting into the flow of games. G League reps will help during his rookie season. But long-term, Porter should look like a gamble worth taking for Miami outside the top 10. The Heat can view him as Dwyane Wade’s long-term replacement at the off guard slot.”

Other names that could be available for the Heat include Indiana guard Romeo Langford, Gonzaga forward Rui Hachimura, UNC, forward Nassir White, and Kentucky forward PJ Washington. Whoever the Heat chooses in next month’s NBA draft, the team hopes they will improve its ceiling for next season. With no cap space to go after elite free agents and no star talent, the draft is one way the team can improve its roster.

Reacting to the Heat’s Loss to the Celtics