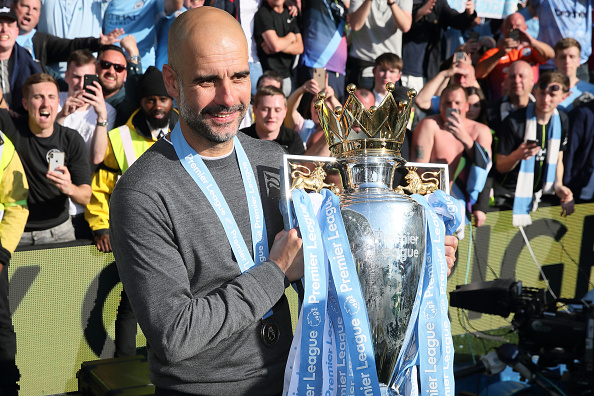 This piece highlights the crazy Premier League Season of 2018-2019. Like always, there was plenty of drama to keep true Premier League fans on the edge of their seats all season long. The Race for the Title lasted until the last day of the season, and the Race for the Top Four was decided in the last few games of the season. Unfortunately, the relegation scrap was decided early on, but the lower level teams performed some stunning upsets to the “Top Six” all season long.

This season offered a two-horse race for the Premier League Title. Liverpool F.C. and Manchester City F.C. battled it out until Match Day 38, with Manchester City edging Liverpool for the title. Manchester City runs like a machine that runs at 100% efficiency, which isn’t possible in modern mechanics I will add, so it is not that surprising that they won the league. Especially, because they pipped a Liverpool team that only lost one time over a 38 game stretch. Pep Guardiola and Jürgen Klopp are arguably two of the best coaches in the world right now and this battle of the Titans was a testament to that. Overall the Title Race gets an A+.

The Top Four Race included the remainder of the “Top Six” teams in the Premier League. Chelsea F.C., Tottenham Hotspur F.C., Arsenal F.C., and Manchester United F.C. rounded out the group that was competing for the two remaining Champions League spots. This race saw Chelsea and Tottenham win the metaphorical “Champions League Qualification Trophy”, and Arsenal and Manchester United fall by the way-side. This race turned out to be quite underwhelming. Chelsea sputtered along all season trying to adapt to the “Sarri-Ball” playing style of their coach Maurizio Sarri, and Tottenham lost a string of games to lower opposition near the end of the season. Arsenal also had a terrible end to their season. They looked the favorite out of the group to qualify for the Champions League, but they too lost a string of games to lesser opposition near the end of the season. Manchester United was abysmal and somehow managed to stay relevant. A major coaching change along with some defensive calamities ensured they too missed out on a Champions League spot. Overall the Top Four race gets a C-.

The Best of the Rest

Unfortunately, none of the “lesser” Premier League teams managed to really challenge any of the “Top Six” for spots in the Premier League Table this season. There was a nine-point difference between the “Top Six” and the rest of the league. Of course there were teams like Wolverhampton Wanderers F.C. (Wolves), Leicester City F.C., West Ham United F.C., Watford F.C. and Everton F.C. who had exciting teams that had some big upsets against the “Top Six”, but in a league where money talks their lack of resources prevented them from breaking into the “Top Six”. Overall though, the problems that teams like Everton and Wolves consistently caused to the “Top Six” did make this bunch an exciting and unpredictable group. Like Charlie Kelly in Its Always Sunny in Philadelphia, they were a bunch of wildcards. Overall the Best of the Rest race gets a B+.

In years past the Premier League has seen some very exciting relegation battles that have gone on to the last game of the season. This can create situations where teams sitting at the bottom of the table will come up with massive upsets against the top teams in the league. Unfortunately, this was not one of those years. The Relegation Scrap was done and dusted pretty early on in the season, which was disappointing to us Premier League fans. Cardiff City F.C., Fulham F.C., and Huddersfield Town A.F.C. seemed to realize their fate early on and just gave up on their seasons. This wasn’t a good look for the Premier League, especially since it offers up some of the most dramatic and entertaining soccer on the planet. Overall the Relegation Scrap gets a D-.