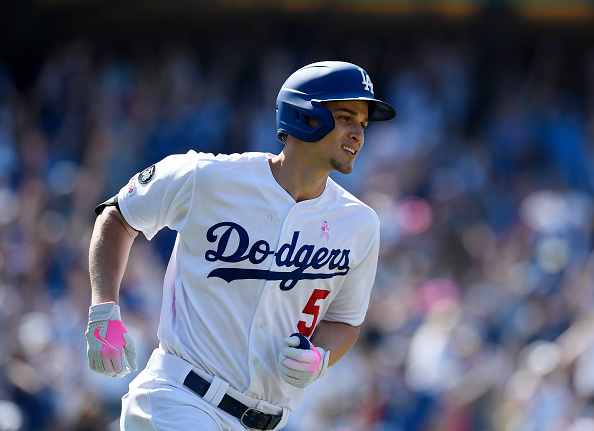 We are currently in the Golden Age of shortstops. The position is packed with stars like Francisco Lindor, Trea Turner, Javier Baez, Manny Machado, Trevor Story, Carlos Correa, and Xander Bogaerts. There are also emerging talents like Adalberto Mondesi and Tim Anderson. But despite such an abundance of talent, we need to make sure not to ignore Corey Seager.

Fangraphs ranked Seager as the #6 prospect in all of baseball back in 2015. When he was called up to the Dodgers, Seager did not disappoint. He averaged 24 HRs and 6.4 WAR in his first two full seasons back in 2016 and 2017. With advanced plate discipline, solid defense, and 20+ HR power, Seager was in the same discussion as Lindor, Machado, and Correa as one of the best young shortstops in MLB at the time. However, a promising start was set off-track by a UCL sprain that led to Tommy John Surgery, limiting Seager to only 26 games in 2018.

Coming into the 2019 season, fantasy owners would have been wise to expect a rusty start for Seager, due to the extended absence as he rehabbed his injured elbow. Seager has slashed .227/.323/.362 with only 3 HRs in 41 games this season. The young Dodger shortstop was already starting to get lost in the shuffle due to his injury, which also wasn’t helped by his slow start. However, there are some encouraging signs when looking at Seager’s profile. For one, his strong plate discipline has actually improved: his BB% has increased from 10.9% in 2017, to 12.2% this season. Another interesting sign is the way Seager is swinging the bat, with his launch angle increasing from 11.1 to 18.1 degrees and his fly ball percentage rising from 33.1% to 47.7%. This suggests that he is trying to hit more home runs. Seager’s career high is 26 HRs, set back in 2016. With the way he is swinging for the fences and the fact that he only has 3 home runs on the young season, it is likely that he will at least come close to that number as a home run binge should be coming. Seager hit a HR in Sunday’s win over the Washington Nationals – expect to see more soon.

I suggest trying to acquire Seager at a discounted price, due to his slow start and lack of counting stats. Remember that this is a guy with prospect pedigree, strong plate discipline, and a desire to hit more home runs. He’s hitting in one of the best lineups in baseball in LA, so expect him to start racking up the stats. The early-season slump will end soon, as this is a solid hitter ready to breakout.

Check out My Other Deep Dives: Lucas Giolito | Rafael Devers

Albert Almora Needs to be in the Lineup Every Day