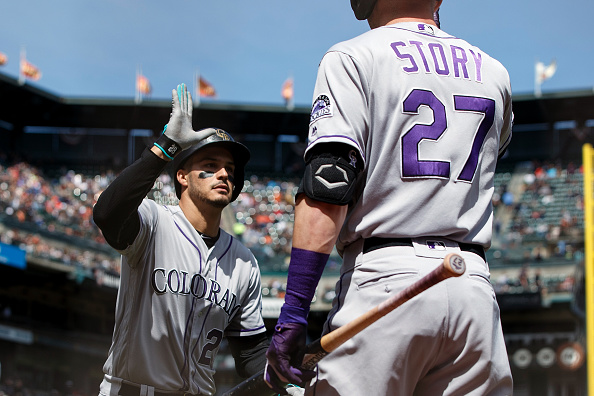 Last time I did MLB DFS was last Sunday and my Mariners’ stack had a great day against the Indians. Hopefully, today’s picks are just as good and help you guys win some cash. All prices will be DraftKings prices.

Last night was a display of offense between the Padres and the Rockies, but it was pretty one-sided in favor of Colorado. Arenado, Story, and Reynolds all kill left-handed pitchers and will face one tonight in Joey Lucchesi. This stack is pretty expensive but should be well worth it.

Now we can take a look at the other side of the spectrum. Jon Gray pitches to contact which can really hurt him when playing at home in Colorado. Machado has started to get it going lately and Hosmer has done well when facing righties. Franmil Reyes has great power upside. This is cheaper than the Rockies stack, so if you want to play a stack that will be pretty low-owned and relatively cheap, here you go.

The Phillies should be coming back with a vengeance tonight after performing poorly on offense and losing last night to Kansas City. Hoskins has been red hot, and Bryce Harper and Jean Segura have decent value price tags. The Royals’ pitching has been their problem this season, so we’ll see if the Phillies can get to them early.

Scherzer is never an easy draw for the opposing team, but he has struggled out of the gate so far, as has the whole Washington team. The Dodgers can hit the baseball and Muncy, Turner, and Verdugo all have good power upside while also being reliable in clutch situations. I doubt many people will run this stack tonight against Scherzer, so this could very well be very low-owned.

Cheap price tag for someone who has upside all around. He is batting leadoff which isn’t great for a one-off, but he’s Ronald Acuna so…

Dozier is batting cleanup against a pitcher who tends to pitch to contact. The guys around Dozier can get on base and Dozier should be able to drive them in.

The lesser Dozier will also crack the list. If you want to punt second base, Dozier is a perfect punt because he is super cheap and also has some upside because of his power.

Michael Conforto vs. MIA (Sandy Alcantara)
DK: $4500
The Marlins’ pitching has been beyond lackluster and Conforto is in a spot where he will be able to drive some guys in (batting fifth) while also having loads of power, especially against right-handed pitchers like Alcantara.

Here’s your star to go after tonight. Jacob deGrom will get his Cy Young stuff back, and when better than against a Miami Marlins team who can’t hit?

Here’s your “scrub” pitcher. The Tigers have been hot and cold when it comes to hitting and they’re throwing an inexperienced pitcher themselves tonight. Stewart is set up for success tonight and should get a look.

MLB DFS – Locks, Stacks, and Barrels for May 15th