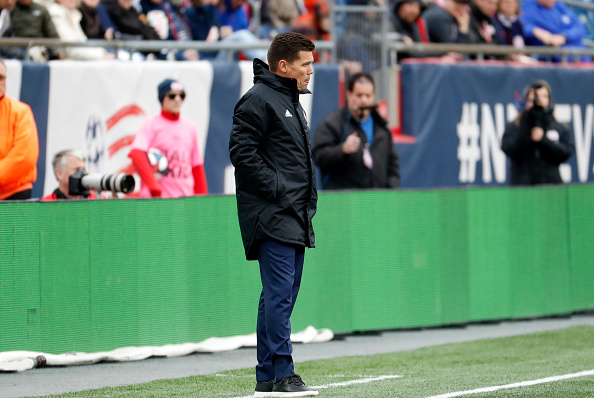 Just about a month and a half ago, there was a real sense of optimism surrounding the expansion FC Cincinnati team. Extremely cautious optimism, yes, but optimism nonetheless. Fast forward to today, and The Athletic‘s Kristian Dyer reported this morning that Head Coach Alan Koch has been fired after a 2-7-2 start to the season.

Hearing, per source, that Alan Koch has been relieved of his duties with FC Cincinnati.

Players will be notified this morning.

This is the quickest that an MLS expansion team has ever fired their head coach, and they made it very clear in their statement that he was fired, as opposed to a mutual decision or a resignation. 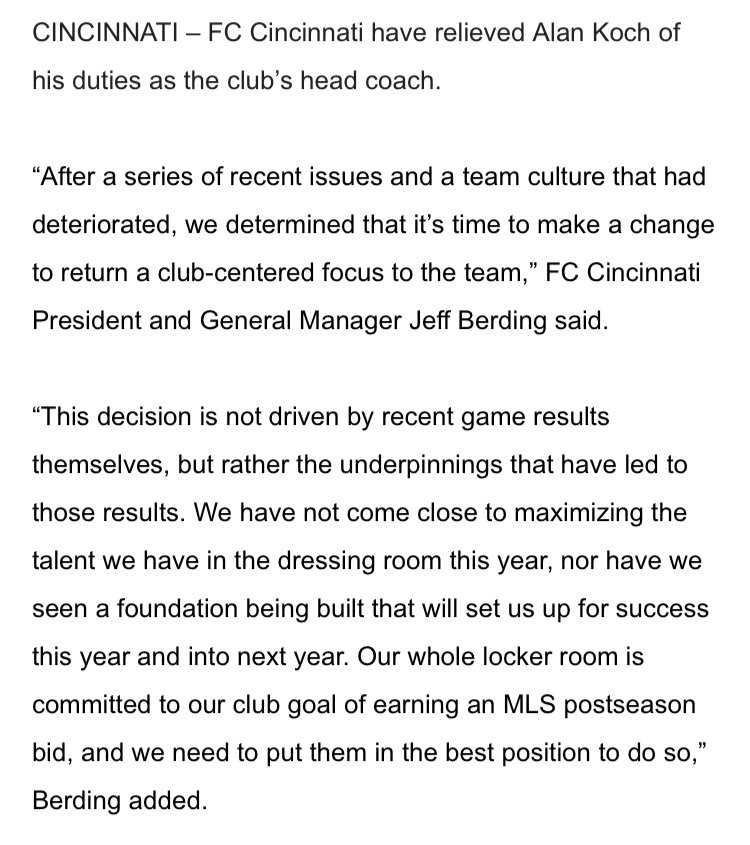 And it has to be conceded that, even for a team as lacking in big-name talent as Cincinnati, whatever “underpinnings” happened that caused them to drop from the form that had them winning back-to-back games against Portland and New England by a combined score of 5-0 to going a full month without scoring are worrying, to say the least.

Cincinnati’s fifth straight loss was this Saturday, when they couldn’t manage to get the ball past Mario Daniel Vega despite the fact that Vega, a distinctly average keeper for the MLS level this season with a 67.8% save rate (11th out of 23 goalkeepers who have played upwards of 500 minutes this year) is behind arguably the leakiest defense in the league (with a startlingly awful 5.9 shots on target allowed per game, compared to a league-wide average of 4.3), with only ten men dressed in San Jose colors for the last 40 minutes of the game. After the game, Designated Player Fanendo Adi correctly accused him of playing players out of position, confirming what fans already knew about Koch’s tactical oddities.

That followed a tumultuous 2-0 loss to the Philadelphia Union, which was only upstaged by a more tumultuous press conference that saw Koch implicitly disparage the ability of his own players by making a public demand for the front office to improve his roster.

Koch is being replaced on an interim basis by Assistant Coach Yoann Damet, who, at 29 years old, is younger than seven of the players he’ll be coaching despite this being the second-youngest team in the MLS.

Damet’s first game in charge will be Saturday against the Montreal Impact, a team that Damet used to be involved with the youth setup with.

Early reports suggest FC Cincinnati do not view Damet as a long-term solution though and will be directing their coaching search toward big names from outside of the country.

Who do you think they should hire?

Note: A correction has been issued to a previous version of the article that stated that Damet’s first game is against the Vancouver Whitecaps. This is not true.

Is Kylian Mbappé’s Future With The French National Team At Risk?

Is the 2022 World Cup the Last Go for Hugo Lloris?