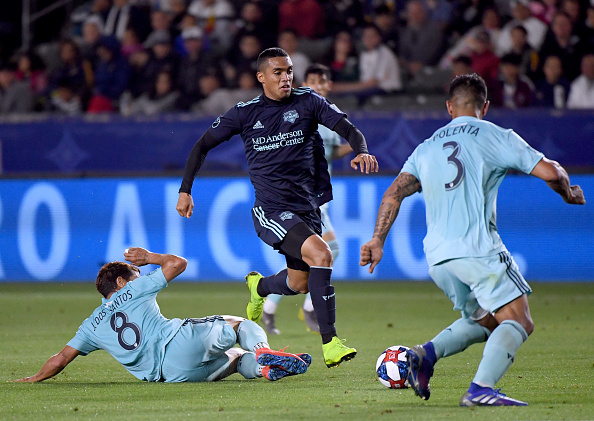 With the league standings starting to take a real shape to them, and a shape that heavily favors a few select west coast teams, here are the three MLS matchups that should be considered must-watch action in Week 10.

As Houston and FC Dallas meet in the Texas Derby for the first time this year, the Dynamo will be looking to use their convincing win over the Columbus Crew as a launching pad into another winning streak. Strike partners Alberth Elis and Mauro Manotas have run rampant over the league, combining for eight goals so far through seven games.

The Houston counterattack has been lethal recently, and they haven’t taken as much of a hit from the absence of DaMarcus Beasley‘s veteran presence on the defensive side of things as many expected. A win could potentially launch them up to 1st in the Western Conference on points per game, pending other results.

FC Dallas has had a bit more unpredictable of a season than their opponent, but they come into this match having picked up 13 of their last 18 potential points. They’re coming off a scoreless draw in which they had a prime chance to score a would-be game-winner after a promising run by Dominique Badji, but Michael Barrios couldn’t get to it. There was a sense of cautious optimism for improved finishing this year with Cristian Colman out with a torn ACL, but that hasn’t been the case from them so far. FC Dallas’ overreliance on set pieces through April could be a worrying sign.

Jesse Gonzalez has been in stellar form all season in goal, saving 75.9% of shots on target, and is a large part of why they find themselves at fourth place in the West (fifth on points per game).

New York finally managed to stop the skid with a banger of a goal by Connor Lade handing them a frankly undeserved 1-0 win over FC Cincinnati – their first win in over a month. After falling down to joint-bottom of the Eastern Conference (and bottom on points per game), both that moment and that result were a huge necessity for them.

Bradley Wright-Phillips has now gone well over 500 minutes without a goal after scoring the third-most goals in the MLS last year, and the regression of him on the attacking side of things and Michael Amir Murillo on their defensive line have been crucial in an alarming fashion.

On the back of a seven-game unbeaten streak, the LA Galaxy have to feel good about their chances in this one. Despite the recent injury of key midfield cog Romain Alessandrini, they haven’t missed a beat, winning the possession battle convincingly in each of the two games since, with Alessandrini’s stand-in, Chris Pontius, assisting on the first of their two goals against Real Salt Lake last Sunday.

LA Galaxy has had long stretches of dominance throughout the season that they haven’t managed to convert into convincing scorelines. Having only managed to win by more than a single goal twice so far this year, a worry of theirs going into this game has to be that the Red Bulls can steal a point or three from them even without outplaying them.

One storyline should override all in this matchup, and that’s Osvaldo Alonso, after 338 appearances over the course of a full decade as a Seattle Sounder, facing off against his former team for the first time. Not only is this his first year for an opposing MLS team, but this is also the first year since they joined the league that they haven’t had him at their disposal.

Minnesota is coming off of their second straight clean sheet for the first time since April 2016, when they were still in the now-defunct NASL. Their 1-0 win over D.C. United also happened to be their first win in their new stadium. The one thing that arguably takes something away from their win was the controversy in disallowing rookie Donovan Pines‘ early goal for D.C. United, but what can’t be taken away is the three points they earned. The Loons will be looking to solidify their playoff spot with a positive result on Saturday.

The Seattle Sounders started off the year with all the momentum in the world. A convincing 4-1 win over MLS debutants FC Cincinnati followed up by five more games unbeaten saw them top of the league and unbeaten longer than anyone else. Now they have anything but momentum. Both their fixtures against Los Angeles FC being just a week apart, with a game in between, will do that. As the Carlos Vela-led LAFC attack has taken the MLS by storm, the Sounders have been their unfortunate primary victim, and as a result, Seattle has missed out on seven of nine possible points in their last three games.

Already dealing with six players listed as either out or questionable at the time being, the one thing Seattle badly doesn’t need is even less depth, and that’s exactly what they have. Both Cristian Roldan and Kelvin Leerdam were shown straight red cards last week and will be suspended for the match. Worst case scenario, Seattle could be without six of their normal starting eleven plus multiple substitutes, making Stefan Frei‘s job harder than it’s been all year. Despite being short-handed, this is still a very important game to pick up points in, with both Texas teams right on Seattle’s tail.

The United States Takes On Jamaica In The Gold Cup Quarterfinals