Is the Warriors Dynasty Coming To An End? 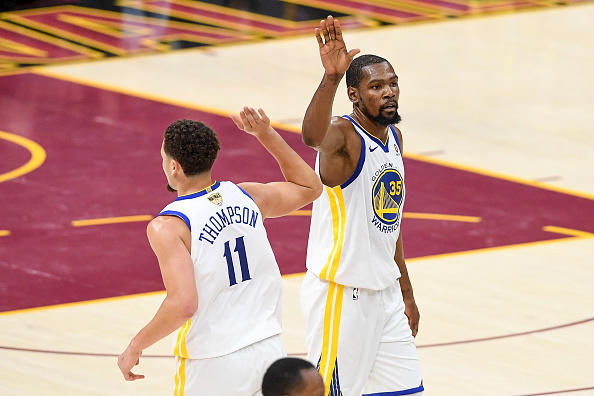 The Golden State Warriors have made it to the finals for four straight seasons, looking to extend that to five straight, this season.

There’s speculation that Kevin Durant leaving Golden State in the off-season is a sure thing. I believe that he will leave Golden State, mainly because he will not agree to take a pay cut, after being the best player on the team, and leading them to two straight NBA final championships. Now, there also does seem to be a disconnect within the team. We all know about the saga that took place against the Los Angles Clippers during the regular season between Durant and Draymond Green with Green not passing the ball to Durant in crunch time, instead, dribbling it down the court himself, and turning the ball over, trying to pass it to Andre Iguodala for the three-point shot. Ever since that moment, the chemistry has not been the same. You’re seeing Durant trusting Klay Thompson more than Stephen Curry in the playoffs. Durant passes the ball to Thompson more now than ever before. That may be because of internal problems in the locker room or simply because Curry has not been playing at the level we are used to watching him play.

Green is the heart and soul of this team, and we have seen him performing at a high level again during the playoffs, after having a disappointing regular season. But, besides Durant, Green, Thompson, Curry, and Iguodala, they don’t have many more options. I know you think that’s four All-Stars, two former MVPs, one DPOY, and one of the best two-way players in the league, in Thompson. However, in the playoffs, fatigue kicks in, and team depth is vital, especially if a series goes to six or seven games. The Warriors can’t rely on Shaun Livingston, Quinn Cook, Alfonzo McKinnie, Jordan Bell, etc. and they can’t rely on Andrew Bogut or Kevon Looney against a team like the Houston Rockets.

Three years ago, just the idea of going up against Curry, Thompson, Iguodala, Durant, and Green was scary. They were called the “death lineup,” no one even mentions that nickname anymore, because teams are not playing with fear anymore; especially the Rockets. I believe the Toronto Raptors are another team who can take down the Warriors. The point is, how the league viewed the Warriors three years ago, even two years ago, they are not viewing the Warriors that same way. Now, teams now want to compete against the Warriors, with two goals in mind, defeating and dethroning them.

Keep in mind, Iguodala is 35-years old, the Warriors don’t have the depth to rely on, and even if the Warriors sign players such as Nikola Mirotic and J.J. Redick, assuming they re-sign Thompson, they won’t be able to sign many more players. Curry isn’t getting any younger, and it seems that he is always getting injured. That is a concern for the Warriors going forward. Who knows if Bob Meyers will remain as the Warriors general manager? He may want to leave after this season, having built a dynasty that will be remembered for a very long time.

Now, some people think that the Warriors can sign Giannis Antetokounmpo in the near future. I don’t think that will happen because by the time Giannis becomes an unrestricted free agent, he will be 26-years old, Curry will be 34-years old, Green and Thompson will be 32-years old. That is assuming Green and Thompson remain with the Warriors until then. The bottom line is, that scenario is unlikely.

This is the end to the Warriors dynasty whether they win this season or don’t. Durant will sign with a different team after this season, and the NBA teams will hopefully be balanced again. But, the Warriors had an amazing run, possibly the greatest run of all-time. Besides the fact they blew a 3-1 lead against the Cleveland Cavaliers in the 2016 NBA Finals, the Warriors won the championship in 2015, became the first team ever to reach 73-wins in 2016. They won the championship in 2017 and 2018, now looking for a three-peat. No matter what happens during the playoffs this season, the Warriors have cemented a dynasty that will not be forgotten.