Eye of the Storm: A Decade of Thunder 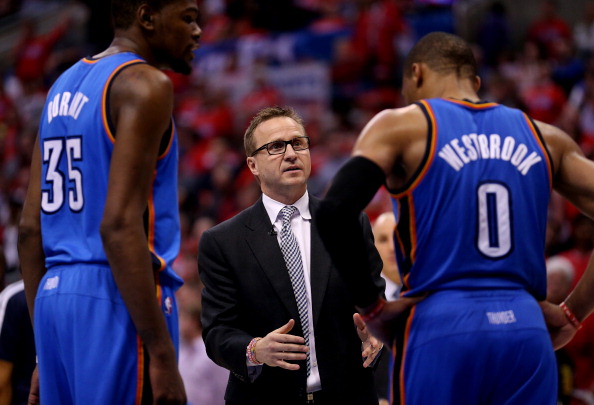 For a third consecutive season, OKC failed to win a best of 7 series in the playoffs. Despite an expensive tax luxury payment, Sam Presti, General Manager of the Oklahoma City Thunder, has failed to derive the championship formula – or even a series winning formula for that matter.

The Calm Before the Storm

After a tumultuous stretch at the turn of the century, the Supersonics were grasping for any sign of hope that life after The Glove was enticing. After the departure of Gary Payton, Shawn Kemp and even coach Nate McMillan, basketball in Seattle was faltering. In 2006, the Seattle Supersonics, two years before the move to OKC, had an abysmal season, finishing 31-51, and were awarded the 2nd pick in the 2007 NBA Draft. The problems originated in the front office and Rick Sund became the scapegoat. Once Sam Presti was tasked with returning this franchise to prominence, he faced the decision that would shape the next era of Seattle basketball: Kevin Durant. Sam Presti made the best draft decision of his career with the freshman forward out of Texas at 2nd overall. However, a rookie KD was not enough to return the Supersonics to NBA relevance. This led to them drafting their 2nd superstar in Russell Westbrook with the 4th pick in
2008, and obtaining a steal with Serge Ibaka at pick 24.

Then, as a bolt of lightning struck the Space Needle, the Oklahoma City Thunder followed and resonated across the landscape of basketball. In their first season as the Thunder, success was still an abstract concept as they finished with a 23-59 record and eventually drafted their 3rd elite talent in James Harden. The turnaround in the 2009-10 season is one the best I have ever seen in my lifetime, increasing their win total by 27 from 23 to 50. This new big 4 propelled OKC to their first playoff appearance since 2005. Flash forward to 2012, and before we knew it, the crescendoing boom of thunder pulsed through the ears of coaches and players across the league as this now stacked Thunder team reached the NBA Finals.

However, the title window closed just as soon as it opened for the rejuvenated franchise. The loss in the Finals to Lebron James and the Miami Heat began the unfortunate turn of events which would derail the Thunder as a franchise for years to come. Unable to work out an extension with former Sixth Man of the Year, James Harden, Sam Presti opted to trade away the soon to be MVP and re-sign Ibaka instead. Personally, I think this was the worst mistake the Thunder could have made. I would have done everything in my power to sign Harden to an extension. Although most players who demand huge contracts are not worthy of them, I view the Harden extension as an exception. To me, sending James Harden to the Rockets was the most detrimental move of Sam Presti’s tenure. I can only imagine how good this team could have been while benefiting from Harden’s production. Despite this move, the Thunder were still powerhouses in the NBA and Kevin Durant became “da real MVP” in 2014. After not making the playoffs in 2015, it was then when OKC went on to start these bad stretches of playoff runs. As much as it pains me to have to write about this next part, I must mention the blown 3-1 series lead against the record-breaking Warriors in the 2016 Western Conference Finals. Shortly after the new Warriors dynasty broke the record of single-season wins with 73, the Thunder had the defending champs against the ropes. While Kevin Durant did all he could in his power to close out the series, the lack of help from the rest of the team resulted in the massive choke. This was their year to finally get over the hump and bring the first ever Larry O’Brien Trophy home to OKC. Yet, once again, they fell short.

During the 2016 NBA Draft, Sam Presti traded away Serge Ibaka for Domantas Sabonis and an emerging Victor Oladipo. They look to be in good shape right? Not so fast. After a painful month since the series loss to the Warriors, even though Durant had given all he had to the organization that drafted him, he poured salt in the wounds of every Thunder fan in existence. Kevin Durant left OKC to sign with the 73-win Warriors dynasty in Free Agency. A year later, Sam Presti took a risk and made the blockbuster trade for superstar Paul George one year before his free agency. This sent away Oladipo after just one season. However, the move I couldn’t fathom the moment it happened is the trade for Carmelo Anthony. Why would Presti be trading away one of the best Sixth Man in the league in Enes Kanter? In my opinion, he was a prolific scorer on the offensive side of the ball and complemented Steven Adams. Why even trade for Melo at all? Ever since Melo joined the Knicks, he has declined due to age. Acquiring an old Melo, well past his prime, was such a boneheaded move, and I could not see how that move made any sense.

Since the KD departure back in 2016, the Thunder have been bounced in the first round from the last 3 playoffs and have yet to win a road playoff game. I’m interested to see how the Thunder will address their issues in the upcoming offseason. Will they fire Presti or Donovan? Will they go after a star Free Agent like Blake Griffin? How about finally rostering a good Shooting Guard? While I do realize it could be much worse for them, there are many questions that need to be resolved within the franchise if OKC wants to contend for the title again.