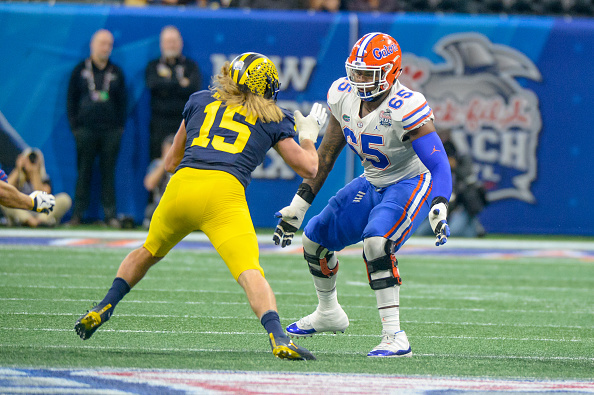 Here is a list of the best remaining prospects heading into Round two of the NFL Draft.

A three-year starter at the University of Florida, Taylor was considered, by many, the best offensive tackle in this draft. Taylor is solid in both run protection and pass protection, although he is better at pass protection. Concerns over his knee caused him to slide out of the first round.

Another prospect who many considered to be the top prospect at his position, Metcalf is built like a monster and runs like one too. His lack of production at Ole Miss has been his biggest downfall. He should be the first wide receiver off the board in round two.

Williams is a freak athlete at cornerback and one that is very good in coverage. By far the best coverage cornerback in this class. Williams is a long corner who can play practically any role in the secondary.

Ford is a raw prospect who can play offensive tackle or guard. His ceiling is very high, matched with a pretty good floor too. For Ford’s size, he is extremely athletic. When Ford is overpowered, his strength helps him to regain that block.

The quarterback in this class with the most experience, Lock has a rare mix of being able to make throws from within pocket and also on the run. He is very good at reading coverage and changing his reads quickly.

A safety with great size and mobility to him. Adderly is the best ball-hawking safety in this class, by far. Teams may be scared off by his somewhat inconsistent tape, but they shouldn’t be. Given his size and experience at both cornerback and safety, teams should know they’re getting a prospect with a very high ceiling who they can plug in anywhere in the secondary and he’ll excel.

A cornerback who excels in man coverage and has very good ball skills. As you watch Murphy’s tape, you can tell he has an insane football I.Q. He is everywhere on the field. A high motor player who will be a steal for any team.

A well-built safety who is athletic and versatile enough to play any in many spots in the secondary, from strong safety to nickel and everything in between. Gardner-Johnson is very good at tracking the quarterback’s eyes and reading where the pass will go before it’s ever thrown.

Just like his Ole Miss teammate, Metcalf, Brown is built extremely well. His size, athleticism, and skill set should help him translate smoothly. Brown is a very good route runner who is fluid in every route he runs.

An instinctive bully at offensive tackle, who possesses the ability to kick inside to guard as well. Dalton is very good with his blocks and keeping the defender square in front of him. He is a smart kid who uses that to his advantage on the field.

Smith is above average in every way at tight end. He is a decent blocker, a good route runner, and has good hands. When used as a lead blocker on a run play is when he will provide his best blocks. If T.J. Hockenson and Noah Fant weren’t in this class, Irv would have been a first-round pick.

McCoy can play both guard and center. An offensive lineman with good hips, who will start on any team he goes to. McCoy possesses a strong bulky frame who is not easily moved by defenders.

The safest running back in this class, with the highest floor and arguably the highest ceiling as well. Montgomery is an instinctive runner who will fight for every yard possible and is not easily brought down. A patient back who will not force a designed run and instead find a way around it and gain positive yards.

Oruwariye is an effective cornerback who is best in press man coverage. A big-bodied corner who has good enough speed to keep up with the majority of receivers. If Oruwariye can win at the line of scrimmage, he is a very good cornerback with outstanding ball skills.

Rapp is a three-year starter with the Huskies who plays at an extremely high level, no matter what quarter it is. Rapp plays just as hard at the beginning of the game and at the end. Where he excels the most is when he is matched up on a tight end.

Among the top players remaining, a couple was expected to go round one including Taylor and Metcalf. Taylor is the undisputed best player available heading into the second round, while after a stellar combine performance, Metcalf should be the first receiver selected tonight. Both players slid for different reasons but both shouldn’t have a long wait tonight. Be sure to check out the second round mock draft.