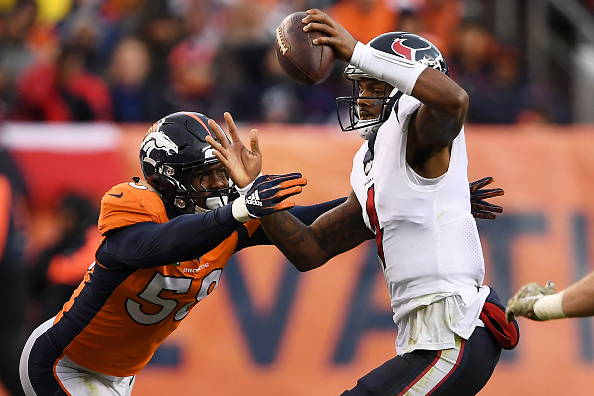 The 2019 NFL draft is just a few days away and teams are putting the finishing touches on their player evaluations. Everyone loves mock drafts so here is a seven-round mock draft predicting every Houston Texans’ pick. Thanks to a previous trade, the Texans have three picks within the top 55 selections. To help with this mock draft, I used the fan speak on the clock simulator.

No quarterback was sacked more in 2018 than Deshaun Watson. The Texans’ offensive line gave up 62 sacks last season despite Watson being a mobile quarterback. In fact, Watson was so beat up last year, he had to travel to a game by bus because he had a collapsed lung and couldn’t get on a plane. Some believe Ford is a tackle, others a guard; either way he will start from day one. I would try Ford out at right tackle before kicking him inside because despite weighing around 330 lbs, he has excellent footwork.

Cody Ford’s feet are 🔥🔥…and he’s listed 346 pounds! This is dominance pic.twitter.com/hmfpClu1YQ

The offensive line is such a problem that it can’t be fixed just by spending a first-round pick on Ford. Starting center Nick Martin is entering a contract year and has been solid but not great. McCoy played mostly center at Texas A&M but has some experience at guard as well. He can spend a year at guard then slide over to center in 2020. McCoy’s ability to see free blitzers and take them out might be the biggest strength in his game. Considering the Texans issues protecting Watson, McCoy’s ability to adjust post snap to blitzes is very valuable.

What a good pickup by C Erik McCoy pic.twitter.com/i68zyI3XC8

Finally, we spend a pick on something other than an offensive lineman. The Texans lost Tyrann Mathieu and Kareem Jackson in free agency and both guys spent time last season at safety and nickel cornerback. During his time at Florida, Gardner-Johnson lined up all over the field but mostly at safety and nickel cornerback. His ability to make plays in the secondary is very good but what he excels at is coming downhill in run support. Gardner-Johnson would be able to step in day one as the Texans’ fifth defensive back, whether line up as a third safety or nickel cornerback.

Chauncey Gardner-Johnson at his best pic.twitter.com/ch5ynOxKTH

The projected starting cornerbacks are Johnathan Joseph and Bradley Roby; both of which will be free agents after the upcoming season and the lack of depth is a concern. The Texans ranked in the top 10 with 15 interceptions last season; however, the trio of Jackson, Mathieu and Andre Hal combined for about half of them. The problem is none of the three will play for Texans next season. Oruwariye has good ball skills, combining for 28 interceptions and pass breakups during his time at Penn State. This pick may take a year to show its value but in 2020, Oruwariye will be a starting cornerback.

Lamar Miller had a very good 2018 season, averaging 4.6 yards per carry and just under 1,000 rushing yards. However, he will turn 28 years old during the draft and will be a free agent after the upcoming season. Former third-round pick D’Onta Foreman is in the mix but the Texans should look to add a running back on day three if for no other reason, to add depth. Anderson was plagued by injuries at Oklahoma and is coming off a torn ACL. However, when Anderson was healthy in 2017, he one of the best players on the Oklahoma team.

.@OU_Football #RodneyAnderson might have have the best player on the field in the 2018 Rose Bowl. Let that sink in, as the #Sooners are favorites to win the Big 12. #BaldyBreakdowns pic.twitter.com/igEbgVZ7S2

DeAndre Hopkins might be the best wide receiver in the league but the duo of Will Fuller and Keke Coutee are injury prone. Furthermore, Fuller has missed 15 games over the last two years and will be a free agent after the season. The Texans traded for Demaryius Thomas at the deadline last season but released him earlier this offseason as he recovers from a torn Achilles injury. The team knows they have to address the wide receiver position and adding Johnson would offer them a low risk-high reward option. Much like Hopkins, Johnson has very good hands.

The trio of J.J. Watt, Jadeveon Clowney, and Whitney Mercilus is one of the best pass rush groups in the league. However, all three have battled injuries in the past and the depth behind them is underwhelming. Furthermore, Clowney hasn’t signed his franchise tag and rumors are swirling that the Texans are listening to offers for him. This late in the draft, taking a shot on a raw pass rusher is exactly what the Texans should do. Crosby has very good athleticism and length, making him an interesting chess piece for defensive coordinator Romeo Crennel.

Maxx Crosby’s athleticism is great, but he really wins with his length. It’s able to allow him to double swipe here and then corner around the edge. pic.twitter.com/VknKlHlKRd

What is Going on with Aaron Rodgers?