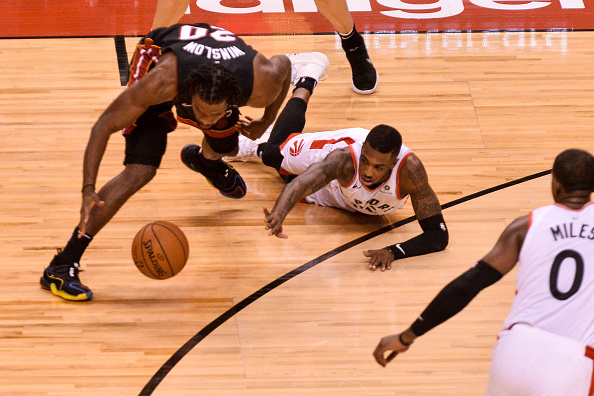 Here are my four takeaways from the Miami Heat’s 110-105 victory over the San Antonio Spurs last night.

After putting up 26 points and 11 assists on Monday, Goran Dragic opened the game shooting 7-for-8 from the field and 4-for5 on threes for 20 points in the first half. He was getting to his spots with ease:

Another strong start for #TheDragon! 🐲@Goran_Dragic is responsible for 20 of Miami's 62 first half points, 15 of which he put up in the 2nd quarter alone! pic.twitter.com/FOdSKeArgc

After the explosive first half, Dragic cooled down in the second half and only scored two points.

Dion Gets into a Groove

With Dragic cooling off the second half, Dion Waiters picked up the slack. The Heat guard scored eight of his 18 points in the third quarter, where the Spurs first cut into Miami’s lead. Waiters converted on four 3-pointers on the night. He also attacked the basket, making crucial, smart layups.

Bam Active on the Glass

While he didn’t score much, Bam Adebayo‘s activity on the glass was huge. Bam finished with a team-high 15 rebounds. He also led the team in assists with five. Although he’s often praised for his defense and athleticism, Bam’s passing ability is also a huge part of his game. Defensively, he looked much more comfortable defending Spurs star LaMarcus Aldridge this time around.

After playing just five minutes against the Oklahoma City Thunder on Monday, Hassan Whiteside was back in mix on Wednesday. Even though he picked up his second foul in the first half, Erik Spoelstra kept him in the game. The Heat crowd really loved his activity on both ends tonight.

Whiteside, who shoots a putrid 44% from the charity stripe, converted all six of his free throw attempts.

Next up: The Heat will travel to Wisconsin to play the Milwaukee Bucks on Friday night at 8:30pm ET.