REACTION: Whiteside powers the Heat past the Hornets 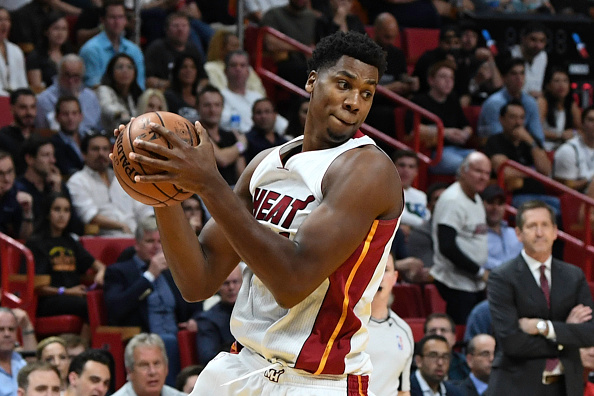 Here are my four takeaways from Wednesday night’s 91-84 Heat victory over the Charlotte Hornets.

Heat move up the standings

It wasn’t a pretty game, but Miami was still able to come out on top. After defeating the Hornets, the team gained sole possession of the eighth seed. They’re now a full game ahead of both the Charlotte Hornets and Orlando Magic for the final playoff spot. But the sixth-seeded Detroit Pistons and the seventh-seeded Brooklyn Nets both won on Wednesday, keeping the Heat 2.5 games behind each of them.

With eighteen games remaining in the regular season, the Heat still have more work to do. And it starts with the upcoming five-game homestead. After playing the Cleveland Cavaliers on Friday, three of the next four games will come against teams with records of .500 or better. For the Heat to increase its chances of a playoff berth, they really need to protect home-court.

Whiteside dominates off the bench

Tonight’s game ball goes to the hometown kid Hassan Whiteside. In his second straight game as a Heat reserve, he had a big impact off the bench. He did a great job of crashing the boards and anchoring the Heat’s defense. Whiteside closed with 18 points, 15 rebounds, and four blocks.

Unstoppable.@YoungWhiteside dominated tonight finishing with 18 points, 15 rebounds and 4 blocks in 20 minutes off the bench.
🔥🎥 #HEATHighlights pic.twitter.com/6SXG9i0and

And Whiteside, who often sits in fourth quarters, almost played the entire fourth quarter on Wednesday.  He really earned his minutes.

Both teams had issues with turnovers, particularly in the first half. The Heat had a 13 point lead in a first quarter that included seven Charlotte turnovers. Then, in the second period, Charlotte forced nine Heat turnovers. The Hornets closed with 19 turnovers and the Heat closed with 18.

Kelly Olynyk continued his best stretch of basketball. While playing a game-high 45 minutes, Olynyk led the Heat in scoring with 22 points and added 11 rebounds. Olynyk shot 8 of 14 from the field — including 5 of 7 from beyond the arc.

The Heat really needed his scoring on a night the Heat’s guards struggled to hit shots. Heat guard Dion Waiters(eight points) shot 2 for 11 and Josh Richardson( 13 points) shot 5 for 14. After starting the game 1 for 10, Dwyane Wade(eight points) finished 4 for 15.

Next up: Heat vs Cavaliers. Game tips off at 8PM ET

The Filipino Connection in the NBA

Philadelphia 76ers: Previewing a 2019-20 season that is Philly’s to lose