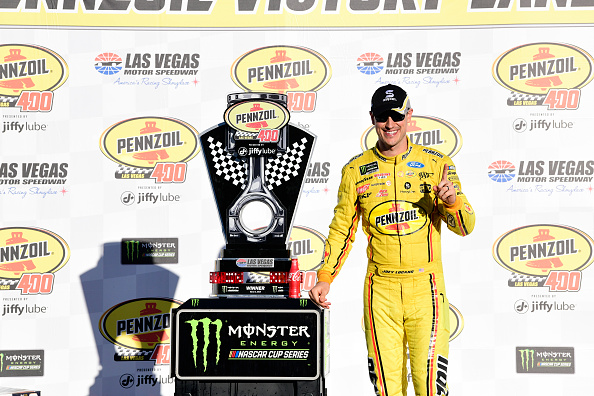 The Pennzoil 400 ran on Sunday and it didn’t disappoint. Ford teammates took the top two spots and there was some reaction to the new rules package.

Joey Logano has punched his ticket to the playoffs, as he held off teammate Brad Keselowski on the final lap to win for the first time at Las Vegas and for the 22nd time in his Cup career. Logano jumps ahead of Kevin Harvick for the Series lead, by two points. Penske drivers have now won back to back races in the Monster Energy NASCAR Cup series. Last week’s winner Keselowski led for 17 laps and gave his teammate a true run for his money, as the two were very competitive over the final portion of the race. Keselowski drove up from 19th to take the lead with 27 laps left, but his hopes for back-to-back victories were snatched away when Logano passed him while getting held up by lapped traffic. He was beaten by 0.236 seconds.

Kyle Busch, Kevin Harvick, and Kurt Busch rounded out the top five. Kyle Busch was itching to capture that Cup race, winning both the Trucks race Friday and the Xfinity event Saturday, winning that Cup race to secure the hat trick, at his home track none the less, would have been the icing on the cake. Harvick started on the pole, dominating stage one, however, he struggled to keep up the strong pace, giving up the lead to Logano halfway in the final stage.

A native of Las Vegas, Kurt Busch captured his first top five in the Cup Series at his home track. He was also the highest finishing Chevrolet driver for the second consecutive race. It was a pretty clean race for the most part, as it featured no caution flag periods for on-track incidents. The only two caution flag periods throughout the race were a result of the endings of the first two stages. 37 of the 38 drivers finished the race.

This was despite aggressive moves by Ricky Stenhouse Jr., who had a very solid race for Roush Fenway Racing. He finished sixth and picked up eight stage points. He is currently ranked seventh in the standings, the highest he has ever been after three races. Martin Truex Jr. started the race in 23rd and finished just ahead of Chase Elliott in 8th.

NASCAR debuted the new rules package in this race. The purpose was to put a stop to certain drivers that continue to dominate numerous races. Their hope is to make the series more competitive. The cars had both tapered spacers and aero ducts, which reduces horsepower, increases downforce and creates conditions favorable to more passing and close racing. The racing was definitely closer for a lot of the race, but not every driver was happy about the new rule changes. Kyle Busch, never one to mince words, was very vocal about his displeasure with the new package.

Next Sunday the drivers will continue to learn the new package as they head out to Phoenix for the TicketGuardian 500.

Personnel groupings on offense for Jets to consider in 2019