Buffalo Bills – What a Difference a Year Makes 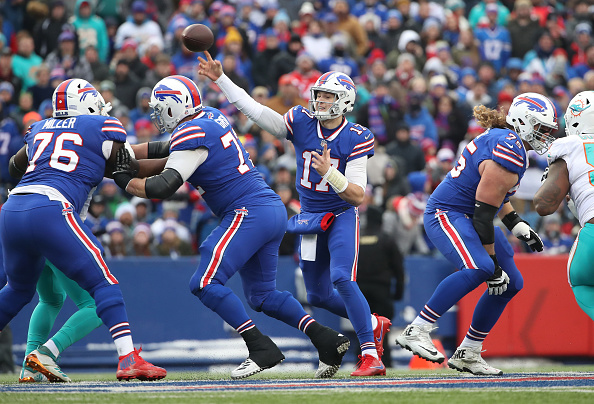 2018 for the Buffalo Bills had some highs interspersed with the lows fans have come to accept. However, the year ended with more hope for the future than has existed for the Bills in almost 20 years.

2018 started with an event the Bills fans had been hoping for as long as a lot of fans have been fans. Through an unbelievable play by Andy Dalton and the Cincinnati Bengals, the 17-year playoff drought was broken and the Bills played in a wild card game. Yes, they lost to the Jacksonville Jaguars, but the heavy playoff drought burden was eliminated. The fans could start the new year talking about other things besides another season of trying to make the playoffs.

There was some hope among fans that the team could make it back to the playoffs, but GM Brandon Beane and HC Sean McDermott did their best to make people understand that was unlikely. When Beane and McDermott came to town they set a plan in motion to eliminate the salary cap mess the team found themselves in. Heading into 2019, most of the mess has been cleared up and players who didn’t agree with the ” process” have been shown the door. The Bills are sitting at close to 80 million in cap space and a lot of holes to fill. GM Beane sent a letter to season ticket holders saying that they would continue to build through the draft as well as developing and signing these players. In addition, a calculated approach would be used in free agency. What exactly this means remains to be seen.

Josh Allen and his Wideouts

2018 was a season of change. Thanks to the draft, the Bills drafted Josh Allen with the 7th overall pick. He was the highest QB ever drafted by the team. Fans opinions on this pick were all over the place as were the draft experts who are paid to tell us their opinion.  Allen started out in 3rd place on the depth chart and spent most of the preseason in that position. Nate Peterman, who is no longer with the team, won the starting QB position but that lasted less than 1 game. The other QB on the roster, AJ McCarron, was traded to the Raiders before opening day for a 5th round draft pick. When Peterman faltered in the first half of game 1, he was pulled and the Allen era began. Allen had growing and learning pains in his first few starts, and fans were getting restless.

Allen sustained an injury to his elbow in their game against Houston. Peterman returned to the field and threw a pick 6. After that questions about who the QB was going to be dominated the thoughts of everyone. Allen was out until the team returned from their bye, and from there on out, he looked like a different player. He broke the single game and season team QB rushing records. Allen also developed an affinity for throwing to Robert Foster, UDFA from Alabama. Foster had been cut, signed to the practice squad, cut from there and then resigned. That string of events seemed to be the wake-up call he needed. When he returned to the field in November, he was unstoppable. He was Allen’s favorite target when he was showing off his cannon arm. In addition, Zay Jones showed improvement from his rookie season and was also on the receiving end of several Allen throws.

Heading into 2019, WR is at the top of the wishlist. Whether Foster, who went from being cut to the #1 receiver on the team and Jones can be long term answers remains to be seen, but additional wide receiver talent is needed through either the draft or free agency.

The running game, which had led the league not that long ago couldn’t get out of neutral. Shady McCoy had his worst year statistically, and many people started asking if he needed to be shown the door too. Shady had a tough offseason after being accused of orchestrating a break-in at his Atlanta house which resulted in his former girlfriend being injured, a civil suit filed, and then allegations of child abuse. The whole mess is still under investigation by both the police and the NFL and to date, no one has been arrested in the break-in and the NFL hasn’t made the results of their investigation public.

Besides Shady, the team signed Chris Ivory in free agency.  He ended the season with a 0.1 yard per attempt better average than Shady. Unfortunately, Ivory’s 3.3 YPC and Shady’s 3.2 YPC were well below what they were expected to do. The other RB, Marcus Murphy, who showed promise in the preseason, failed to do the same during the regular season. The team has already said Shady is part of their plans for 2019. Ivory is on a team-friendly contract and Murphy is on a rookie deal. The debate continues whether the run game problems were the RB fault or something else. RB needs to be on the offseason list, but may not be a pressing need. If something better becomes available, then think long and hard.

Tight End and the O-Line

The Tight End position was manned by Charles Clay, an expensive underperforming veteran, Jason Croom, a UDFA who didn’t make the roster in 2017, signed to the practice squad, impressed all during 2018 offseason and made the final 53. He is an example of the player Beane was referring to when he explained the teams plan to develop their own. Croom got more and more playing time thru the season. Now that Clay has been released is Croom the new #1? The other TE, Logan Thomas, was also a UDFA, but he hasn’t been as impressive as Croom in his development. One thing Thomas has done is become a much better blocker and also a good special team player. How that will translate to the new Special Team Coordinator’s positional needs remains to be seen.

Most people feel that the Bills biggest need in the offseason is to improve their offensive line. Between 2017 and 2018 the Bills lost 3 starters. Eric Wood, through unexpected retirement due to injury, Richie Icognito’s litany of issues and ultimate retirement and Cordy Glenn‘s trade to the Bengals. The line never seemed to all be on the same page.  Some plays they did well and other plays they looked like they didn’t belong anywhere near an NFL playing field.

The offseason began with the firing of Juan Castillo and the hiring of Bobby Johnson to replace him. Hopefully, a younger set of eyes and attitude will help to right the offensive line. Besides wide receiver, offensive tackles, guards and a center top the offseason wish list for the Bills. Which direction the Bills go will depend a lot on what the new coordinator needs.

The special team unit was a disaster for the Bills in 2018. Heath Farwell was named the new coordinator and will hopefully be able to to get that part of the team back to better form.

The one bright spot for the Bills was their defense. They played well enough to keep the team in games, but when they played badly, the offensive deficits became even more obvious. The run game was once again the Achilles heel of the defense. When they were able to stop the oppositions running backs, the defense looked better.

Heading into the season most felt that Safety was a big question mark. Jordan Poyer and Micah Hyde quickly dispelled that thought. They proved to be a force to be reckoned with. Due to injury, the Cornerback position became a revolving door. Rookie standout TreDavious White was generally tasked with shutting down the oppositions number 1 receiver which he did on a regular basis. He still needs to get better at intercepting the ball, but keeping the other teams’ wide receiver in check is acceptable for now.

Taron Johnson played with an injured shoulder but still was one of the top 5 defenders on the field.  He was a major upgrade at nickel cornerback. He was a powerful tackler and helped to prevent little gains from becoming back breakers. The 3rd cornerback, the one opposite White was a major question mark for most of the season. The season started with Phillip Gaines manning the position to less than ideal results. Gaines was replaced by Ryan Lewis, who likewise proved to be a liability. Lewis was replaced by UDFA Levi Wallace who finally proved to be a reliable corner opposite White.

Linebacker Tremaine Edmunds was the Bills 2nd first round pick of the 2018 draft.  He was 19 years old when the season began and proved by the end of the season to be a great draft pick, the heir to leading the defense inherited from Kyle Williams after his retirement at the end of the season. Edmunds disrupted play after play and should continue to do that for many years to come. 2017 5th round draft pick, Matt Milano, May end up being diamond for the price of cubic zirconia. He was a force to be reckoned with when he was on the field and the missing piece when he was on the sideline.

The leadership of Lorenzo Alexander will continue for another year after he signed a 1-year contract to return in 2019. Since coming to the Bills he has played like he is much younger than the 35 candles on his last birthday cake would lead you to expect. Having him available to work with the young guys on the roster has been invaluable to the Bills.  Hopefully, they will draft his eventual replacement and let the new guy learn the position the right way from Alexander.

Jerry Hughes did what Jerry Hughes has done since coming to Buffalo from Indianapolis. He wreaks havoc in the opposition’s backfield. While he only had 7 sacks in 2018, he was covered with a double team by the opposition. Despite being double teamed, he still gave most of the quarterbacks faced fits.

The most improved player this season was Shaq Lawson. He has improved each year, but in 2018 he got better in pass blocking and learned how to disrupt pass plays by sticking his big hands in the space between the quarterback and the intended receiver. A lot of fans wanted him run out of town last year.

“Trust the Process” has become the rallying cry for all Bills fans and the team as well.  Sometimes the process is obvious and sometimes it isn’t, but just like the weather in Buffalo, wait 5 minutes and there will be something new going on with the Bills. 2019 will hopefully be better than 2018. Bills fans deserve some dessert after eating their vegetables all these years without complaint.

New York Jets vs. New England Patriots: A divisional? battle between the winless and the undefeated