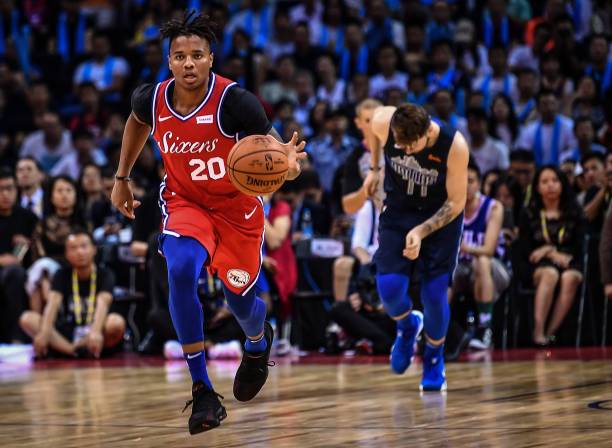 As you probably already know, Anthony Davis is not a Laker (yet?). Mike Conley is shockingly still in Memphis. We didn’t see Beal or Kemba or Vucevic leave town. What we did see was still madness though, and Mike Fanelli and I have decided to break it down for you, trade by trade. This is the final part of a four-part series where we’ll go over each of the 22 trades made this week, providing commentary and our own personal grades for each team’s involvement in each move. You can find part one here, part two here, and part three here. Hope you enjoy! – Josh

Josh: For the Lakers, this move was all about clearing out a roster spot for the buy-out market. It’s long been speculated that they are aiming to sign Carmelo Anthony, but they haven’t had the roster space to do so anymore. While many may be surprised by the Lakers’ willingness to part for Zubac in exchange for a stretch big who happens to be statistically the worst player in the entire NBA at knocking down wide open shots, they weren’t planning on re-signing him anyway.

The Clippers aren’t planning on Michael Beasley joining the team, but Zubac is a solid center who they plan on starting the rest of the year after waiving Marcin Gortat. As the only “true center” on the roster, he should get a lot of playing time in order to audition for a bigger contract this summer. Unless the offseason goes terribly wrong for the Clippers, don’t expect him to be a Clipper for very long. LA Lakers: C+   LA Clippers: B-

Mike: Adding Muscala is a good move for the Lakers; the reason for the bad grade is because they gave up Zubac for no reason. Reportedly, Zubac was one of the players tossed around in the Anthony Davis discussions, so why was he traded for Muscala? The Lakers didn’t even need to add him salary wise, as Beasley’s salary would be enough to match Muscala’s under NBA trade rules.

Getting Zubac isn’t a steal because he isn’t a great young asset but he is better than Muscala and now the Clippers get half a season to evaluate him before he becomes a restricted free agent this summer. While the Clippers will need all their cap space to sign two max players this summer, they could potentially sign and trade Zubac for a role player or draft pick. LA Lakers: D-   LA Clippers: B+

J: Sacramento finally made a move to offload Labissiere after reducing him from a starter during parts of last season to completely outside of the rotation this year. They bring back Swanigan, which on a level is puzzling since they couldn’t find playing time for Labissiere. How do they expect there to be opportunities for playing time for Swanigan? He’s a hustle guy who loves to dunk though, and fans in Sacramento should expect to like him.

Labissiere seems likely to take away a lot of Meyers Leonard‘s minutes and should be capable of both stretching the floor and acting as a rim protector from the four and five positions. A major complaint people had about him last year was that he was too weak to play the post position. Having bulked up over the summer, we should finally get to see how that affects his game. Sacramento: B   Portland: B

M: Every year we get one of these trades where it seems teams make the move just for the sake of making a move. Labissiere is a former late first-round pick who is under contract for next season. The Blazers will get some length and three-point shooting from Labissiere and he is an interesting player to add to the end of the bench.

Much like Labissiere, Swanigan is also a former late first round pick and from the same draft. Swanigan has played in just 45 games in his career and has struggled when given minutes. The Kings have too many centers on the roster already, led by Willie Cauley Stein, and that’s why they traded Labissiere. Maybe Swanigan can jump-start his career in Sacramento? Sacramento: D   Portland: C

J: The drafting of Trae Young and Kevin Huerter this year led to Tyler Dorsey’s role taking a massive hit as a second-year player. He never got consistent enough minutes to get a good rhythm going, and Atlanta deemed him surplus at the deadline, trading him for Shelvin Mack, who they’re going to immediately waive.

Memphis’ acquisition of Delon Wright as a part of the Marc Gasol trade helped push Shelvin Mack out the door. He did a decent job as Mike Conley‘s backup, but Mack and Wright are relatively similar players, and with Mack’s contract expiring, they figured shopping him to see if they can get any assets to help them begin to rebuild was the best course of action. Now they get to see how much of a sharpshooter Dorsey can be in their system. Atlanta: B   Memphis: B

M: This is the ultimate “who cares” kind of trade. For the Hawks, they must have wanted Mack’s veteran leadership to add to an overall young locker room. With Trae Young as the point guard of the future, Dorsey, a former second-round pick, wasn’t getting much playing time.

For the Grizzlies, they are looking towards the future and while Dorsey may not turn into a long term contributor, the Grizzlies will get about 30 games to evaluate him before deciding whether to offer him his $1.8 million dollar qualifying offer this summer. Mack is an older veteran and wasn’t in the team’s rebuilding plans. Atlanta: C   Memphis: C+

J: Philadelphia has officially given up on Markelle Fultz. And it’s the right move. Not necessarily because he’ll never blossom into the player people expected him to – I sincerely hope and believe he will at least somewhat turn his career around – but because they can’t afford to wait any longer. They’ve made it very clear that they think they can win now and that they plan on doing everything within their power to do so. They knew Orlando needed a point guard and had some extraneous wing players they could use, and pulled off what should be a great move despite Simmons’ extremely poor shooting this year thus far.

On the other side of things, Orlando has much more flexibility when it comes to patience. They grabbed a player for fairly cheap who has been unfairly labeled a bust before he’s even played a single healthy NBA game. Fultz happens to fit a position need and the Magic’s organization is a much less stressful place to rehab and play than Philadelphia is right now. If there’s anywhere he can get this turned around, Orlando’s one of the top opportunities available. Philadelphia: A   Orlando: A-

M: The Magic needed to make some kind of move at the deadline. With no long term answer at point guard on the roster, kicking the tires on Fultz was exactly what they needed. Of course, Fultz has a lot of injury concerns so there is a lot of risk that comes with this trade, but the Magic didn’t give up much. A package of a top-20 protected pick, a second-rounder, and a role player is not much to give up for the former number one overall pick.

After making the Tobias Harris trade, the 76ers needed to add to their supporting cast, as their contending window is now. It was a question mark if Fultz would play again this season or not, so moving him was a must. Simmons will provide energy and defense off the bench while getting back a future first and a likely top-35 second-round pick replenish the 76ers’ draft stock after moving four picks for Harris. Philadelphia: B   Orlando: B

J: Boston has spent all year trying to find someone willing to take on Jabari Bird for them. Bird actually showed the potential to be a solid role player last year as a rookie but has since missed the entire season due to his ongoing domestic violence/kidnapping/strangulation/witness intimidation case. He’s being waived. Never expect to see him in the NBA again.

Atlanta did this move only because Boston’s paying them a bit more than what would cover Bird’s contract. Bird won’t ever play for them and the pick won’t be conveyed. It just nets them some free cash. Atlanta: A   Boston: A+

M: The Hawks will get enough cash to cover the rest of Bird’s contract and a little extra for their troubles. Because NBA rules require both teams to get something back in a trade, the second-round pick the Hawks will send back is top-55 protected and will never transfer.

For the Celtics, this is all about opening up a roster spot for the buy-out market. Bird hasn’t played this season because of off-the-court issues and the Hawks will waive him once the deal is completed. The Celtics are in the luxury tax so they will save some money with this trade as well. Atlanta: B   Boston: A+

J: I never like when a team has to give up a draft pick simply in order to get rid of a guy. Especially when said player is on an expiring contract like Monroe is. Either wait it out and let him go at the end of the season or waive on your own. A second-round draft pick may not seem like much, and it oftentimes isn’t, but second-round picks can often turn into decent contributors and occasionally much more than that. Don’t just hand them out for free.

For Brooklyn, it’s a no-brainer even though they’re not keeping Monroe. There’s every chance Kawhi Leonard leaves Toronto if they don’t make the Finals this year, and that would likely push this free pick into the 30s.  Brooklyn: A-   Toronto: B-

M: The Nets are making a playoff push but Monroe won’t be part of that as they will reportedly waive him once the deal is completed. Monroe wouldn’t get any minutes in Brooklyn behind Jarrett Allen and Ed Davis anyways. This deal is all about getting a second-round pick in 2021 for a few bucks and some paperwork.

Despite all their trades, the Raptors still want to open roster spots for the buy-out market. Their luxury tax bill is one of the highest in the league and removing Monroe’s $1.5 million cap hit from their books was smart. The only reason this trade didn’t get an A grade is that with all their trades, the Raptors have traded away three second-round picks in their last three trades. Brooklyn: A+   Toronto: A-