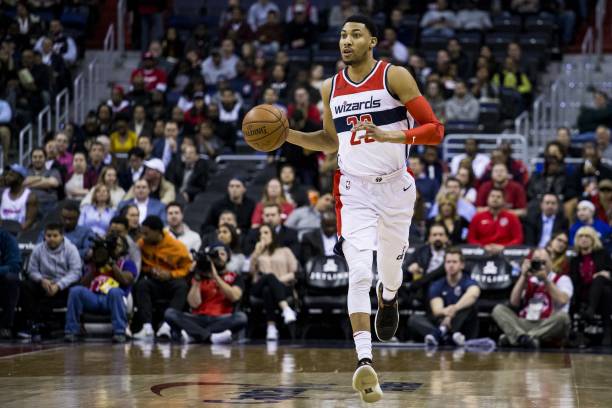 As you probably already know, Anthony Davis is not a Laker (yet?). Mike Conley is shockingly still in Memphis. We didn’t see Beal or Kemba or Vucevic leave town. What we did see was still madness though, and Mike Fanelli and I have decided to break it down for you, trade by trade. This is the second part of a four-part series where we’ll go over each of the 22 trades made this week, providing commentary and our own personal grades for each team’s involvement in each move. You can find part one here. Hope you enjoy! – Josh

Josh: Moving Tyler Johnson’s contract has been a priority for Miami this year, with his salary not matching his output by any means. Phoenix gets a point guard finally, even if he’s not the optimal playstyle to be in a backcourt next to Devin Booker. He’s a short-term solution for Phoenix, who are very happy to get Ryan Anderson off the books, and win the trade simply by finding a taker for Anderson. Wayne Ellington has been bought out and will be a Detroit Piston.

The Heat had to take on Ryan Anderson and lose in order to trade away Ellington, and are letting Ellington, who’s not getting games in Miami, go as well. Anderson’s no longer a net positive player and likely nearing the end of his career, but they did manage to convince him to agree to make part of next year’s salary non-guaranteed, saving them from the luxury tax next year. The big problem with Miami at the moment is that they seem to to have no direction, and they did a lot less in this window than they maybe should have. Phoenix: B+ Miami: C+

Mike: For the Suns, dumping Anderson’s contract on someone else was a win. Getting back Johnson, who, while overpaid, is a nice combo guard, is just icing on the cake. The Suns will waive Ellington, allowing him to join a playoff team. Both Anderson’s and Johnson’s contracts run through next season so neither team is shedding long term salary. As part of the deal, Anderson agreed to make about $5.7 million of his $21.2 million contract for next season non-guaranteed.

The Heat have been looking to unload Johnson for a while now in order to lighten their luxury tax bill. This trade now has the Heat just over the line and they should have made a small move to get under the line. By Anderson agreeing to make part of his contract for next season non-guaranteed, the Heat will be able to waive him and get under the luxury tax line for next season. Phoenix: A Miami: C+

J: If the infected heel injury that ruled John Wall out for the rest of the year wasn’t bad enough, now he has a torn Achilles Tendon too, and there’s honestly no way he’s ever going to be the same player again. It’s a near-certainty he won’t return to the floor until the beginning of the 2020-21 season. At that point, he’ll be making $40+ million a year, trying to come back from the worst injury in sports, at 30 years old. The Wizards had to start cutting their losses, and Porter’s the first domino. Expect Bradley Beal to be gone by the summer. They get back two expiring contracts they can easily let walk, and Portis just scored 30 in his debut. If he keeps that up, he might just stick around.

I’m a bit wary of the Bulls’ end of this deal. Porter has an absolutely awful contract that they’re now locked into for likely two more years. While he’s a great role player who’s able to do a lot of things on both ends very well, a team in their situation, with so many promising young players and a very high draft pick this summer, should generally be wary of bringing in players with large salaries whose peak is “extremely good role player”, especially considering they’re in a big market. Chicago: B- Washington: A-

M: Since Parker was signed in the offseason, many expected it to go bad. The Bulls are rebuilding and have a huge hole at small forward. They won’t be players in free agency so kicking the tires on a 25-year-old who shoots a career 40% from three is a good move for two expiring contracts and a future second-round pick.

With the John Wall injury news, the Wizards have decided to trade away pieces in order to get under the luxury tax. With this trade, the Wizards saved about $3.3 million dollars against the tax. Porter had one of the more overpaid contracts in the league so swapping him for two expiring deals isn’t a bad return, but it’s disappointing they couldn’t have gotten more for a young three point shooter. Chicago: B Washington: C+

J: The Sacramento Kings have a real shot at making the playoffs this year, for the first time since 2005-06. While the Clippers decided to give up on the playoff race, the Kings are embracing it. Part of that included replacing Shumpert, in the middle of his best season since his rookie year, with Alec Burks. Burks is an upgrade as a threat from deep and a slight improvement when it comes to ball movement, but he doesn’t bring too much to the table that the Kings don’t already largely possess. I don’t see this move as a productive one for them.

The Rockets, in their quest to add as many playoff-quality role players to surround James Harden with, bring in Shumpert, who should be a great fit playing a role similar to what Ariza did. They also offload Brandon Knight’s contract in exchange for what they expect to be a late first-round pick.

Cleveland’s in a very different situation from Houston, and being able to stockpile yet another pick in exchange for taking on a bad contract is a great move for them. They’ve made the direction they’re going in very clear. Sacramento: C+ Houston: B+ Cleveland: A–

M: Shumpert was averaging around 26 minutes per game for the Kings but they had been shopping him all season long. They view Burks as an upgrade on the wing and want to make a playoff push as their first-round draft pick will either belong to the Celtics or 76ers no matter where it lands.

The Rockets have been looking to upgrade their small forward spot and add shooting all season long. Shumpert has long been a target for the Rockets because of his defense and shooting. Shumpert is shooting 37% from three this season and being able to shed Knight’s contract for next season is well worth giving up their likely late first round pick.

J: A more productive toward potential playoff success for Sacramento is the addition of the extra scoring boost Harrison Barnes could bring to the team. Set to slide into Shumpert’s abandoned starting slot, he should form a deadly three-headed beast along with Buddy Hield and DeAaron Fox on offense, though his below average defense and the disappearance of his mid-range shot could limit how much he improves the team.

The promising new-look Mavs get a chance to offload Barnes, who doesn’t fit naturally alongside Luka Doncic, and actually get some value back. Z-Bo will never join the team, but his expiring contract helps make their summer easier, and Justin Jackson is a young asset who could develop into a real spark plug of a scoring threat. Sacramento: B+ Dallas: A-

M: This is the perfect win-win trade for both teams. The Mavericks future is Luka Doncic and Kristaps Porzingis, making Barnes a very movable player. With this deal, the Mavericks now have a huge trade exception they can use if they want and will be free agent players this summer. If the Mavericks can convince a star player to join the young duo this summer, the Mavericks will have won the trade deadline.

The Kings are making a playoff push for the first time in a while and they have always liked Barnes. Swapping out Jackson, who was averaging just 20 minutes a game, and Randolph, who has yet to play this season, for Barnes is such a great move. The Kings reportedly are hopeful that Barnes turns down his player option this summer so they can resign him to a long term deal. Sacramento: A+ Dallas: A+

J: The Wizards had an opportunity to get under the luxury tax line for the first time in a long time with this move, sending away an injured Markieff Morris for Johnson, who should have a negligible impact on the team.

New Orleans saw the chance to get what they should expect to be a relatively high second-rounder without giving up any real value. Morris will be immediately waived. New Orleans: B Washington: B-

M: In the middle of all the Anthony Davis turmoil, the Pelicans basically bought a future second-round pick for about $2.5 million; the difference between Morris’ and Johnson’s contract this season. Both players are on expiring deals so it doesn’t impact the Pelicans’ long term cap situation. Morris is being released as he recovers from injury.

With this move, the Wizards are just under the luxury tax line for the first time in years. Morris has missed the last 18 games with a neck injury and the Wizards were not likely to resign him this offseason given their salary cap situation. Johnson very well could be a candidate to be bought out as the Wizards are looking at a lottery pick. This move was all about getting under the cap; unfortunately, it cost them their second-round pick in 2023. New Orleans: B- Washington: C

WNBA Set the Standard for League-Wide Activism in 2016