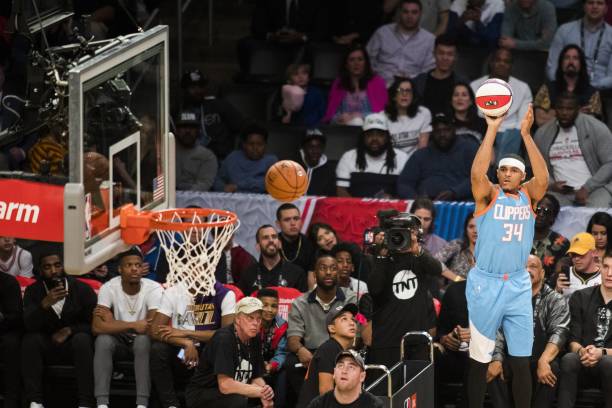 As you probably already know, Anthony Davis is not a Laker (yet?). Mike Conley is shockingly still in Memphis. We didn’t see Beal or Kemba or Vucevic leave town. What we did see was still madness though, and Mike Fanelli and I have decided to break it down for you, trade by trade. This is the first part of a four-part series where we’ll go over each of the 22 trades made this week, providing commentary and our own personal grades for each team’s involvement in each move. Hope you enjoy!   –   Josh

Josh: Most of us were shocked when Kristaps Porzingis went from comfortably being a member of the Knicks’ injured reserve list to being a Maverick in little over an hour.  It turns out that’s not exactly how things actually went down. Nonetheless, it’s a move that, if Porzingis manages to recover fully, could be huge for Dallas. Pairing Porzingis and Luka Doncic could be lethal, and Hardaway, while at times inconsistent, has a good chance at finding a role in the Lone Star State as well.

The Knicks moved swiftly and decisively, pulling off a deal that gives them an even bigger shot at attracting multiple big-name players this summer. While fans will be understandably heartbroken to never see their star play for them again, this move gives them a major opportunity to start fresh, with a high-potential point guard and two first-rounders to help them along the way. Dallas: B-   New York: A

Mike: The Mavericks have never been shy about swinging for the fences. Adding Porzingis comes with some risk given his injury history and uncertain contract future. However, pairing him with Luka Doncic gives the Mavericks a bright 1-2 punch going forward. Only bad part of this trade is they can’t move a first round pick till 2025 and had to take on the long term contracts of Hardaway and Lee.

With Porzingis unhappy with the Knicks’ front office, a trade was going to happen at some point; the return they got was excellent but comes with a hitch. With the trade, the Knicks were able to clear enough cap space for two max contracts this offseason, but they haven’t had much success landing free agents over the past eight years. Will that change this summer? Dallas: A-   New York: B-

J: The Chicago Bulls find themselves as the ‘dumpee’ in a salary-dump deal yet again. Timothe Luwawu-Cabarrot struggled to etch out a role in Billy Donovan‘s rotation and Oklahoma City saved $7.3 million against the luxury tax by sending him packing.

While Chicago has a large number of wings that won’t make Luwawu-Cabarrot’s path to playing time easy (especially after the addition of Otto Porter), tank-mode can help get him on the floor enough to give him a chance to prove he belongs in the league. Chicago: B- Oklahoma City: A-

M: Luwawu-Cabarrot is a former first-round pick who has struggled to find consistent minutes in his NBA career. Hopefully, the tanking Bulls will give him a chance to see the floor consistently. If not, they got enough money to cover the cost of his $1.6 million dollar salary plus a little extra for their trouble.

The Thunder are deep into the luxury tax and Luwawu-Cabarrot was just collecting dust on the bench. Trading him away lightens their luxury bill and opens up a roster spot for the buy-out market. Since NBA rules require both teams to get something in a trade, the second round pick the Bulls sent is top-55 protected and the Thunder will never see it. Chicago: B   Oklahoma City: A+

J: As a Blazer fan myself, I’m so excited for us to have actually filled two of our most pressing needs (bench scoring and length at the wing from anyone other than Evan Turner) through just one player. Portland must agree with me, because they already named a mountain after him!

In all seriousness though, he’ll be a big push toward playoff aspirations for them, and they got him for quite cheap, especially if he opts to stay with the team in free agency. I don’t like the idea of a team that relies on building through the draft losing a pair of second-round picks, but they are in as close to win-now mode as they’ve been in almost 20 years, so it’s very much necessary. Cleveland did a great job to keep stockpiling picks in exchange for a player who would’ve left for nothing in a few months. Portland: B   Cleveland: A-

M: For a while now, the Blazers have been looking for shooting and scoring off their bench and they finally got it with Hood. For his career, Hood is a 37% three-point shooter, while averaging 12.8 points per game. Stauskas and Baldwin were playing limited minutes, so really this was a swap of two second-round picks for Hood.

Since the start of the season, the Cavaliers have done a good job acquiring picks in exchange for players they don’t want to keep long-term. Hood turned down a long-term deal this past offseason, instead taking the one-year qualifying offer. Hood wasn’t going to re-sign this summer so flipping him for two expiring contracts and two unprotected second round picks is a steal. Portland: A-   Cleveland: A+

J: Elton Brand believes the Sixers are contenders right now, and this move is him putting all of his eggs into that basket. A very bold move by the rookie GM sees Philadelphia entering the last couple months of the season with a projected starting five who are all capable of regularly scoring 20+. It also sees them enter the offseason with a ton of uncertainty, considering the looming free agencies of Harris and Jimmy Butler. Will losing all the young assets they just sent west be worth it? Only time will tell.

The Clippers, despite a surprising showing thus far this year, called it quits on this season with this trade, despite being in a playoff spot, and for good reason. This could easily be the most important offseason in the Clippers’ history. Not only does trading Harris now signify that they’re looking toward this offseason, and not only does it give them a couple extremely intriguing young assets, but it also slightly devalues some assets Boston and Toronto have… something that could be a little helpful in potential battles for Kawhi Leonard or even Anthony Davis. And every little bit helps. Philadelphia: B   LA Clippers: A+

M: This move comes with a lot of risk. The Heat’s 2021 unprotected first-round pick is the best draft pick asset in the league, and trading it away for a player who has never made an all-star game is a questionable move. The 76ers are hopeful to build a big four with Harris, Jimmy Butler, Ben Simmons, and Joel Embiid. However, Harris and Butler are free agents this summer, and if they leave, the 76ers will have given up a lot of assets for nothing.

For the Clippers, this is the perfect trade for them. Their goal was always to have enough cap room to sign two max players this summer, but doing so would mean losing Harris for nothing. Instead, they get rid of him five months earlier and get back a former first-round pick (Shamet), two expiring contracts and four draft picks. Now the Clippers have enough cap space for two max contracts this summer and the assets needed to add a third via a trade. Easily the best deal made at the deadline. Philadelphia: B-   LA Clippers: A+

J: Many Laker fans would’ve liked to have seen Svi Mykhailiuk be given a chance to blossom into a home-grown hero, but he’s being moved on from by the organization already in a prudent move. The Lakers, frankly, don’t have time to wait for him. Reggie Bullock brings to Los Angeles the 3-and-D repertoire that’s so valued by contending teams right now, and his contract expires after the year, so he doesn’t get in the way of any future plans if the Lakers don’t want to retain him.

Mykhailiuk got off to a rough start shooting the rock after showing promise in the Summer League, and for a guy who’s main role is shooting, that’s a problem. With Luke Kennard already in Detroit, Mykhailiuk may not come across the opportunities he’d hope for. I doubt he’ll be a Piston for long. The deal’s mostly about getting value back for an expiring deal, similar to with Cleveland and Hood. LA Lakers: A-   Detroit: A-

M: Not the trade the Lakers were hoping for, but adding Bullock will give the team the one thing it lacks; shooters. Bullock is a career 40% shooter from three and, currently, the Lakers rank in the bottom five in three-point shooting. By comparison, Mykhailiuk is shooting just 32% from three this season. Bullock is a free agent this summer and won’t impact the Lakers’ free agent plans.

Bullock was playing big minutes for the Pistons, but the team had no intention of resigning him this offseason. Instead of losing him for nothing, they get a future unprotected second round pick. Mykhailiuk’s contract for next season isn’t guaranteed and the Pistons can waive him at no cost. In addition, the Pistons are now safely under the luxury tax line, another factor in trading Bullock. LA Lakers: B   Detroit: A

J: Emir Preldzic has not played for Phoenix, Cleveland, Washington, Dallas, Indiana, or Toronto. I’m going to guarantee right now he’ll never be a Sixer either. I don’t know what the record for the most times a player’s rights have been traded without ever playing in the league is, but he’s got to be getting close.

Malachi Richardson has appeared significantly out of his depth in the limited time he’s seen the floor in his three years in the NBA. Philly’s immediately waiving him to make room for another deadline-day acquisition, James Ennis. He’d be smart to latch onto a G League team. Aside from Toronto saving some money, the most important part of this deal by far is the draft pick the Sixers get. Expect 2022 to be a very deep draft. If Kawhi leaves and the Raptors are rebuilding in that stage, Philadelphia just (very) quietly pulled off a coup. Philadelphia: A+   Toronto: B+

M: This might be one of the most boring trades at the deadline this year, but there is meaning behind it. Richardson was collecting dust on the Raptors bench and adding to their luxury tax bill. Preldzic was a second-round pick almost a decade ago and, at 31 years old, he will never play in the NBA. By paying the rest of Richardson’s $1.6 million dollar salary, the 76ers add a valuable draft pick. Richardson was waived after the trade was completed.

Not only do the Raptors lighten their tax bill and open up a roster spot, it means the 76ers could be looking at a top 40 pick in 2022. It is widely believed that if Kawhi Leonard leaves as a free agent this summer, the Raptors will look toward rebuilding. If they do, the Raptors very well could still be in the lottery come the 2021-2022 season. Had the Raptors put some protection on the pick, this would get an A+ grade. Philadelphia: A   Toronto: B+