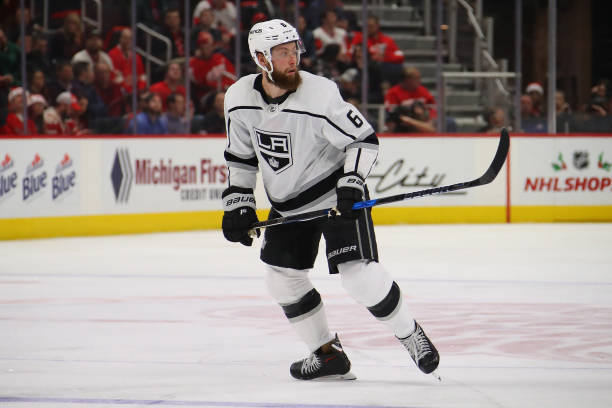 The first big deal of the Trade Deadline season went down tonight as it was announced that the Toronto Maple Leafs have acquired defenseman Jake Muzzin from the Los Angeles Kings. In exchange, the Kings acquire right winger Carl Grundstrom, rights to defenseman Sean Durzi, and a first-round pick in the 2019 NHL Draft.

Muzzin, part of the 2014 Stanley Cup Championship team, has 21 points, four goals and 17 assists, so far this season in 50 games played. In his career, Muzzin has 213 points with 51 goals and 162 assists. Muzzin is coming off a career year in points last year with 42 points in 74 games for the Kings. Muzzin has played eight years in the NHL, all of them with the Kings after signing as a free agent in 2010.

Grundstrom was drafted by the Maple Leafs in the second round of the 2016 NHL Draft, with the 57th overall pick. This year for the Toronto Marlies of the AHL, Grundstrom has 13 goals and 16 assists in 42 games. He will be assigned to the Ontario Reign, the AHL team of the Kings.

Durzi is currently still in the Ontario Hockey League, or the OHL, playing for the Owen Sound Attack. Durzi has had an incredible year offensively with eight goals and 20 assists in 26 games. For a defenseman, those are good numbers.

This trade will definitely be the start of the Kings much-anticipated rebuild. Muzzin will be a free agent at the end of the 2019-2020 season so this trade will alleviate some cap room for the Kings with Muzzin making $4.45 million over the next two years. The Kings will also finally start getting some young prospects in their system, something that was desperately needed. For the Maple Leafs, Muzzin not only brings a Stanley Cup championship to the team but also gives the Maple Leafs another strong defenseman that is comfortable on either side of the point to potentially pair with Norris Trophy candidate Morgan Rielly. The Maple Leafs seem to be going for the Stanley Cup with this trade, and it will be interesting to see if this is the beginning of the end for the Kings’ core.

Bruins: 3 Early Trends That Are Cause for Concern

Jake DeBrusk has Turned his Season Around

Rangers Week in Review: Me ‘n’ You & the Boys in Blue