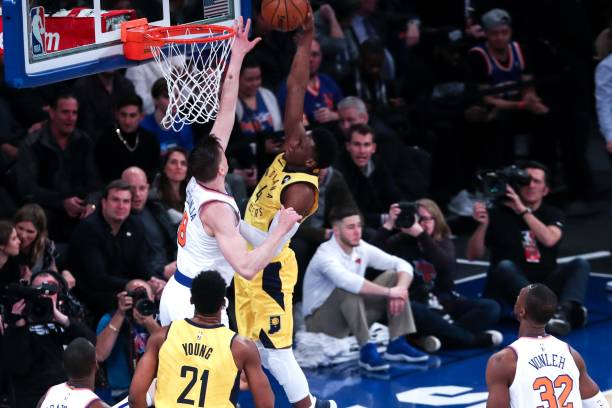 Victor Olapido suffered a gruesome injury to his right knee in Wednesday’s contest against the Toronto Raptors. Oladipo was carried off the court on a stretcher and looked to be in a tremendous amount of pain. Oladipo would only play 10 minutes going 2-of-4 from the field and 0-of-1 from three on his way to 4 points, 3 rebounds, and 1 assist.

Oladipo was further evaluated on Thursday and it was determined that he suffered a ruptured quad tendon that will require surgery and force him to miss the rest of the season. There is no timetable for his return though it’s doubtful he returns before next seasons All-Star break.

Oladipo won the NBA’s Most Improved Player of the Year for the 2017-2018 season and was putting together another successful season registering his second-highest points and steals per game, and his highest assist and rebound averages. Oladipo’s continued success on the court likely would have gotten him his second all-star appearance.

Currently, the Indiana Pacers hold the third seed in the Eastern Conference at 32-15. Philadelphia and Boston are close behind, each trailing by less than two games and ready to strike. The Pacers will likely battle with Charlotte, Miami, and Detroit for the final playoff spots in the East.

The timing could not have been worse, as Oladipo’s injury comes just before the trade deadline, and at a time where many teams are looking to make strong pushes towards the postseason.

Oladipo’s presence will be sorely missed as he is the Pacers team leader in points per game. Indiana could pursue a trade but they have not been linked to any of the trade rumors that have surfaced as the deadline nears. The Pacers also have a wealth of depth at the guard position with seven other guards on the roster thus making a trade unlikely.

Cory Joseph, Darren Collison, and Tyreke Evans will have to take on the extra duties at the guard position. Evans will likely become the starter in Oladipo’s absence. Rookie Aaron Holiday has had little impact on the teams season but will likely see an increase in minutes as the Pacers look to develop their young talent.

The Pacers also have second-year guards Davon Reed and Edmond Sumner on the roster. but the two have combined for 43 minutes in 13 appearances this season.

Indiana’s quintet of big men will also need to improve upon their already steady contributions. Domantas Sabonis and Bojan Bogdanovic will need to increase their scoring & rebounding moving forward. Myles Turner will be leaned upon for his rim protection; he is averaging an impressive 2.8 blocks per contest.

The MVP Case for Steph Curry

Reaction to Wizards vs Heat