Reaction to Nuggets vs Heat 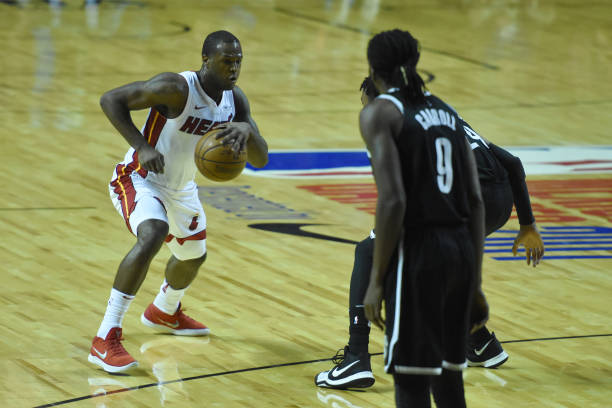 Here are my four takeaways from the Miami Heat‘s 103-99 loss to the Denver Nuggets.

Miami finished with a season-low six turnovers on Tuesday against the Nuggets. Unfortunately, one of those turnovers was costly in the end. Down 101-99 with 2.4 seconds left in the game, Kelly Olynyk threw the inbounds pass away while trying to connect with Josh Richardson for what would’ve been a game-tying alley-oop with two seconds to play.

The loss puts Miami right below .500 at 19-20, falling to seventh in the Eastern Conference playoff standings.

After sitting out the past two games since his debut last Wednesday, Dion Waiters finally got the chance to play again. And he didn’t disappoint. In 25 minutes, Waiters finished with a team-high 15 points (6-of-10 from the field), and four assists. Waiters immediately provided a spark to the Heat’s offense, which struggled in the first quarter, in the second period. The Heat guard scored nine points on 4-of-5 shooting in 11 first-half minutes and dished out three assists, leading the Heat to a 52-49 lead on the Nuggets going into half-time.

Good things were happening for #11 in the 2ndQ tonight! @dionwaiters3 finished the quarter with 9 points and 3 assists. Take a look at how he made it happen! pic.twitter.com/73aVWCDQR3

Waiters’ ability to drive to the basket and create shot opportunities for himself and others opened up the Heat’s offense and may have jumped him back into the Heat’s regular rotation. With Goran Dragic out, this is exactly what the Heat needs. Now the question is who will be left off? On Tuesday night, it was Derrick Jones Jr.

Big minutes for Bam Adebayo down the stretch

Bam Adebayo had a strong fourth quarter, scoring 11 of his 13 points in the period. Most of his points came off of lobs but the Heat center did an excellent job of setting screens and rolling hard to the basket. He also made Nikola Jokic work for every basket. However, Jokic was still able to convert many of them, including a game-winning basket.

Adebayo finished with 13 points on 6-of-7 shooting, four rebounds, and he dished out an assist.

The Heat played the Nuggets on the second night of a back-to-back set. The Nuggets arrived in Miami very early in the morning after Monday’s loss to Houston. They also were playing in their third game in four nights without starting wing Gary Harris, who was out due to a hamstring injury. Unfortunately, Miami didn’t take advantage of this.

Miami will get another chance when the Boston Celtics arrives on Thursday. The Celtics will play home Wednesday night against the Indiana Pacers and then travel to Miami. Like Denver, Thursday’s game will also mark Boston’s third game in four nights.