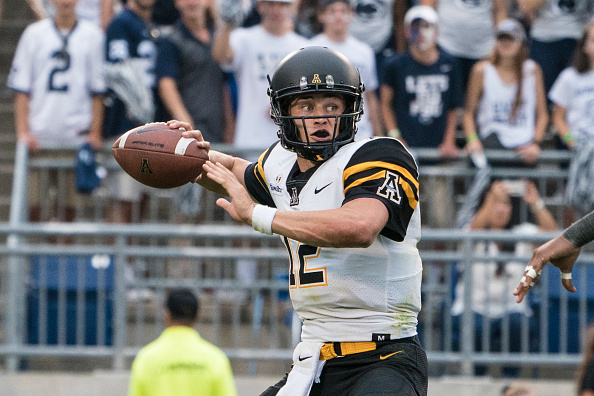 Appalachian State enters its R+L Carriers New Orleans Bowl matchup against Middle Tennessee without a permanent head coach. Having just recently lost Scott Satterfield to Louisville, Mark Ivey will step in and coach the Mountaineers for now. Middle Tennessee is playing in a school-record fourth straight bowl game and fifth in the last six years. They will be looking to bounce back, after blowing the Conference USA Title in a 27-25 nail-biter against UAB in early December.

Strengths – Sun Belt’s offensive player of the year, Zac Thomas has proved a capable game-manager behind center. Although he doesn’t bring an array of top-notch passing numbers to the table, only throwing for 1,862 passing yards on the season.

What Thomas does bring however is great awareness when he’s out on the field, recording only four picks. On top of that, he helps the ground game control the clock and tempo even adding an incredible 10 touchdown runs.

For the season, Appalachian State ranks 17th in the nation with 2,892 yards rushing and averaging 241 yards per game which ranks 15th. Along with Darrynton Evans, you also have three players that tallied over 400 yards in total rushing, along with an eye-popping 20 touchdowns between the three of them. That’s serious production.

Getting the luxury of being able to rely on a more than capable Mountaineers Defense. They have allowed no more than 19 points in any of their 10 wins, holding five opponents to single-figures. Safety Desmond Franklin’s four interceptions this year are tied for tops in the Sun Belt and place him among the top 13 in the country. Brent Stockstill will need to be on his game.

Weaknesses – Appalachian State has been especially atrocious in their kickoff coverage. They are among the bottom of the barrel in the country in terms of yards allowed. Keeping Middle Tennessee from gaining too much of an advantage on field position will be a big factor in whether the Mountaineers will prevail.

Can’t afford to give Stockstill to many opportunities with great field position. Expecting that superb Mountaineers defense to continue to bail them out could prove costless.

They do not have one receiver on the roster that even comes close to 800 yards receiving. Their only viable option, Corey Sutton leads the team in receptions with 36 along with 695 yards receiving and a very respectable 8 touchdown grabs. The depth is quite brutal after Sutton, Dominique Heath with just over 300 yards and 5 touchdowns is the only other receiver worth mentioning.

Strengths –  Playing under his father, head coach Rick Stockstill. Brent Stockstill is the all-time leader in passing yards with 12,142 and touchdowns with 105 at Middle Tennessee.  He ranks among the nations best this year. Having completed 70.5 percent of his passes for 3,214 yards with 28 touchdowns against eight interceptions. His leadership will be pivotal as they look to get off to a good start.

Defensively, Middle Tennessee finished the season strong as they held three of their last seven opponents to under 17 points.  They rank in the top 25 in interceptions with 14. Reed Blankenship earned First Team All-C-USA honors after leading MTSU with 83 tackles and 7 passes defended. He was looked to a lot this year, to make plays.

Over a three-year span, Lee has accumulated 209 catches for 2,482 yards and 21 scores, providing a steady presence for Stockstill. Patrick Smith and Gatlin Casey round out their solid three-man receiving trio. Combining for over 1,750 yards receiving to go along with 16 touchdown snares.

Weaknesses -The Blue Raiders didn’t run the ball much and weren’t very good at it when they did with the exception of Chaton Mobley, but even then, he had just under 600 yards rushing and 4 touchdowns. After him, there is a big mish-mosh of guys that have chipped in with yardage and touchdowns along the journey.

Terrelle West, Tavares Thomas, and Zack Dobson, all with over 200 yards rushing each. When the opposing quarterback has more than twice as many touchdowns on the ground as your own starting tailback, it’s not pretty.

Wesley Bush CB MDSU – Bush has been dangerous in that defensive backfield. Leading the Blue Raiders defensive unit with six interceptions, two touchdown returns, and 139 interception yards that ranks second in the country.

Darrynton Evans RB APSU – Second in the Sun Belt in rushing yards per game. He accumulated 1,037 yards, despite not starting until the sixth game after Jalin Moore went out for the season with an ankle injury. Just recently rushing back a 97-yard kickoff return in the Sun Belt Conference championship game.

Chandler Staton PK APSU – Hitting on all 55 extra-point kicks, and perfect 4 for 4 on field goals from 40-49 yards. Chandler Staton has been as clutch as they come for the Mountaineers special teams. This game could come down to a late field goal, he could end up coming in real handy.

It's All About The U, Tate Martell is heading to Miami