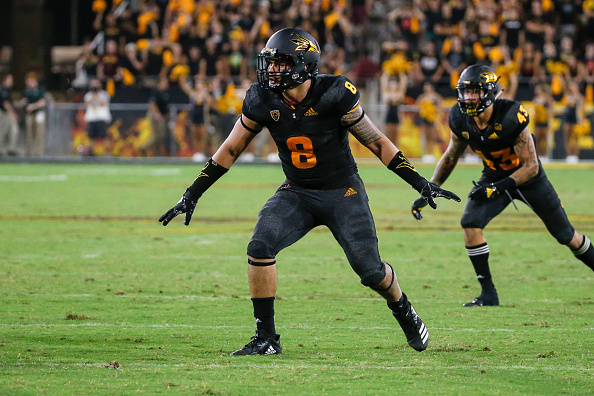 The #21 ranked Fresno State Bulldogs have the opportunity for their first-ever 12-win season when they face Arizona State in the Las Vegas Bowl on December 15. For Arizona State. I’m sure they would love nothing more than to finish off Herm Edwards first season, with the Bowl win over a ranked opponent. Arizona State and Fresno State have met just three times, with the Sun Devils winning all three meetings. Quite surprisingly though all three games were through the years of 1931-41.

Strengths – Sun Devils offensive line has by far been one of their greatest strengths. It’s one reason, sophomore running back Eno Benjamin has put up the yardage he has this season. Having only allowed 15 sacks this season, which is second in the Pac-12 and tied for 19th overall. They were in fact named semifinalists for the Joe Moore award.

Herm Edwards’ first season as head coach at Arizona State is drawing to a close. Having not coached since his forgettable exit with the Chiefs a decade ago. He has for the short term, shown the doubters up since his move. Winning four of the last five games. Along with finishing second in the Pac-12 South, when many didn’t expect them to get out of the basement. I certainly expect Edwards to be ready for this.

Quarterback Manny Wilkins finished the regular season with 2,896 yards and 19 touchdowns with only four interceptions.  Currently fifth in passing yards in school history, with an opportunity to move up to third, if he hits 333 yards in the bowl game. Ahead of Sun Devil legend, Jake Plummer. Wilkins will be without his favorite target N’Keal Harry, however. Harry declined to play in the Las Vegas Bowl, as he plans to enter the upcoming Draft.

Weaknesses – With N’Keal Harry bowing out of this upcoming Bowl. The wideout depth will take a serious hit, that much is obvious. He was easily the go-to guy for Manny Wilkins, nearly doubling the yards of the next best Sun Devils receiver. If you include the touchdowns, he had just one less, then the rest of the corps combined.

Then on top of that, you factor in the stingy Bulldogs pass defense. That allows just over 193 yards a game. So Wilkins will be expecting some of the lesser known receivers to really step up and give him a little something extra, to keep the passing game flowing.

The young defense was noticeably ailing at the tail end of the season, giving up a combined 99 points in its last three games. With a week to prepare Defensive coordinator Danny Gonzales needs to get to work, perhaps the time off can help recharge the batteries a bit. They’ll be going up against a Fresno State team that has put together a very lethal passing attack this season.  No time for showing up half-assed.

Strengths – Top wideout KeeSean Johnson, hauled in 93 passes for 1,307 yards and eight touchdowns this season. Passing Davante Adams, for first on the Bulldogs’ all-time list for receptions. Goes without saying he will be expected to show up, exploiting a soft ASU secondary.

Eddie Robinson nominee Jeff Tedford has the Bulldogs in position to win 12 games in a season for the first time in school history and in the Las Vegas Bowl. After just helping lead his club to a Mountain West Conference title over Boise State. What more can you add, he’s been fantastic. You don’t think, he’ll be looking to put the icing on the cake?

Fresno enters this game with one of the more dangerous defenses in the nation, that contributed to the strong season they had. The run defense ranks 27th in the nation with 129.8 rushing yards allowed per game, containing opponents to just seven rushing touchdowns all season. They’ll be tested in this game, regardless. Facing an opposing running back that averages over 5 yards a game.

Weaknesses –  If there is one main weakness I could point at, that would certainly be the running attack. Using a pair of backs in Ronnie Rivers and Jordan Mims all season, they combined for 967 yards. That combined rushing yardage, ranks them tied for 56th in the country, with Shamari Brooks of Tulsa. Given the weapons, they possess at quarterback and wide receiver. It’s average production, to say the least.

The kicking game has been another sore spot. Asa Fuller is 13-of-21 on field goals, 3-of-7 on attempts 40 yards or longer. Fuller’s 61.9 field goal percentage ranks 9th in the Mountain West, and 98th in the country.

Definitely not solid production. Will his shaky accuracy, be a factor if this game ends up coming down to an important field goal or extra point. With the way Arizona State can churn out yardage, could end up becoming a much closer game than expected.

Merlin Robertson LB Arizona State – In just his freshman season, Robertson has become the leader for the ASU defense with a team-leading 77 tackles, five being for sacks.

Named the Pac-12’s Defensive Freshman of the Year, joining former Sun Devils, Junior Onyeali (2010) and Vontaze Burfict (2009) to take home the honor. While the Arizona State defense has been wildly inconsistent, Robertson has been the one consistently strong presence.

Marcus McMaryion QB Fresno State – Completing 69.9% of his passes this season with 25 touchdowns compared to just three interceptions. His 3,453 yards passing ranks 12th in the country. His completion percentage ranks him 7th, right on the heels of Heisman finalist Dwayne Haskins, and first in the Mountain West.

Developing a pretty strong relationship with KeeSean Johnson. I expect them to hook up early and often in this contest. I’m sure McMaryion would appreciate if that defense could use their talent, at forcing turnovers, to get him some extra opportunities.

Eno Benjamin RB Arizona State – Eno Benjamin had a historic season for the Sun Devils, becoming just the third rusher in team history to match the 1,500 yards rushing plateau, needing just 42 more to in order to break the single-season record.

His best showing this season was another game that put him in the school record books, rushing for 312 yards against Oregon State. It could be quite possible that Benjamin gets 30 carries in the Las Vegas Bowl.

Rashod Bateman Opts Out of 2020 Season