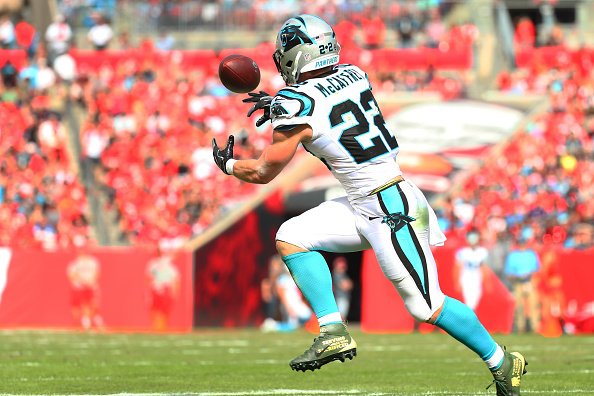 The fantasy football playoffs have finally arrived! Most leagues begin the path to a championship in week 14. With that said, here are the latest PPR rankings to help kick down the door and lead you to a fantasy football title.

1. Alvin Kamara @ Tampa Bay-Three touchdowns on 9 grabs for 112 yards in the week one loss to Tampa Bay.

2. Ezekiel Elliott vs. Philadelphia-151 yards on the ground, along with 6 catches and two scores in the week 10 outing in Philly. Averaging about 160 yards in his young career vs. Philly.

3. Christian McCaffrey @ Cleveland-He’s been running through everyone lately and the Browns are allowing running backs to roast them for nearly 170 total yards a game.

4.  Phillip Lindsay @ San Francisco-Lindsay has all but turned the Broncos fortune’s around by himself. Two straight ballgames with 100 plus rushing yards and 5 trips to the end zone over his last three.

5. Todd Gurley @ Chicago-Be wary of this matchup as the Bears will look to shut down the high-powered Rams offense on Sunday night.

6. Saquon Barkley @ Washington-Barkley did manage 9 receptions for 73 yards in the first meeting but was only held to 38 yards on the ground.

7. Leonard Fournette @ Tennessee-Missed the Indy victory with a suspension, but was starting to hit on all cylinders before that happened.

8. Nick Chubb vs. Carolina-Continues to find ways to get yardage in an up and down offense every contest.

9. David Johnson vs. Detroit-Johnson can only do so much with arguably the worst offense in the NFL. He should have a solid outing at home versus a downward trending Lions squad.

10. Tarik Cohen vs. L.A. Rams-With Jordan Howard disappointing to often, Cohen has shined and the Rams defense could allow similar results to this PPR giant out of the backfield.

1. Antonio Brown @ Oakland-The Steelers ought to rely more on airing it out with James Conner on the shelf for this one.

2. Michael Thomas @ Tampa Bay-He lit the Buccaneers D up with 17 targets and nearly 200 through the air in week one.

3. Davante Adams vs. Atlanta-How will the Joe Philbin lead Packers respond in the winnable tilt?

4. Keenan Allen vs. Cincinnati-The Bengals look done for the season and Allen just worked the Steelers secondary for 14 snags in that must win Sunday nighter.

5. DeAndre Hopkins vs. Indianapolis-Had 169 and a score in the first of what is now a 9 game winning streak for the Texans.

6. JuJu Smith-Schuster @ Oakland-The former USC Trojan is a low-end WR1 against a defensive backfield that has seen Gareon Conley emerging as of late.

7. Mike Evans vs. New Orleans-Evans struggled versus Carolina in both contests but caught all seven of his targets for 147 yards and a TD in the week one surprise win over the Saints.

8. Odell Beckham Jr. @ Washington-Eight snags for 136 in week 8. He also threw for a touchdown in last week’s big win over the Bears.

9. Julio Jones @ Green Bay-Is coming off his worst performance in 2018, but still Matt Ryan looked his way 8 times while only connecting twice.

10. Amari Cooper vs. Philadelphia-The Cowboys are winning because they are feeding Zeke and Cooper. Expect the same gameplan moving forward for the NFC East-leading Cowboys.

2. Travis Kelce vs. Baltimore-The Ravens defense is playing at a high level again so don’t anticipate Kelce to put up monstrous numbers in the playoff-like duel in Kansas City.

3. George Kittle vs. Denver-The only 49er worth starting on a weekly basis will continue to get open and put up effective points at a shallow position.

4. Eric Ebron @ Houston-Ebron was the lone bright spot in a 6-0 defeat at Jacksonville. Andrew Luck loves throwing to his tight ends and Ebron is a TE1 for the rest of the fantasy playoffs.

5. Jared Cook vs. Pittsburgh-Cook garnered 100 yards in the Chiefs loss but is the clear mainstay in Oakland’s depleted offense.

6. Rob Gronkowski @ Miami–Tom Brady historically struggles in Miami. The Patriots need to get their all NFL tight end involved more though down the stretch to prepare for the postseason.

7. Cameron Brate vs. New Orleans-The Bucs are a pass-heavy team right now and that bodes well if you own any Tampa pass catchers currently in what might be another shootout.

8. Jordan Reed vs. N.Y. Giants-Giants defender Landon Collins went on IR, which means more opportunities should flow Reed’s way in a must-win battle for the Redskins.

9. David Njoku vs. Carolina-Is one of the most inconsistent offenses in the NFL. May come back at home playing a reeling Panthers club that needs a victory to stay alive in the NFC playoff race.

10. Vance McDonald @ Oakland-McDonald’s been targeted at least four times in the past 5 outings. The Raiders cannot cover tight ends so put him in your lineup with confidence.

I also like Austin Hooper @ Green Bay, and Evan Engram (If Active) @ Washington