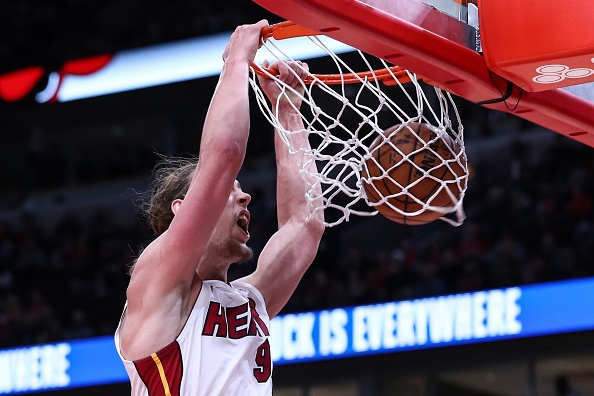 Here are my thoughts on the Miami Heat‘s 102-100 victory over the Utah Jazz:

Dwyane Wade to the Rescue

Just like old times, Dwyane Wade came through in the clutch again for the Miami Heat. After being fouled by Rudy Gobert on an aggressive drive to the basket, Wade hit two clutch free throws with 3.2 seconds left to seal the game. A couple of possessions before that, he had launched himself several rows into the stands while chasing a loose ball. Even at age 36, the Heat legend continues to give his all for the team.

Wade also dished out a season-high eight assists, including one great pass to Hassan Whiteside in the fourth quarter. The Miami guard closed the game with 15 points (seven in the fourth), three rebounds, one steal, and one block.

For the first time in four games, Whiteside played in the fourth quarter. In previous games, coach Erik Spoelstra has opted to play reserve centers Bam Adebayo and Kelly Olynyk over the 29-year-old down the stretch. However, this time, Whiteside’s production in the first three quarters earned him minutes in the fourth.
His stretch in the second quarter was huge, as he put up 13 points, grabbed eight rebounds, and made one block in the period, ultimately finishing the game with 23 points and 20 rebounds. The only area he struggled with tonight was free throws, which continues to be a concern. Whiteside shot 1/6 from the charity stripe against the Jazz. Since November 23rd victory over the Chicago Bulls, he has only made just two of his last 17 attempts.

With 1:36 left in the first period, Miami trailed Utah 35-16. The Heat then used a 20-0 run to come all the way back and take a one-point lead in a span of just six minutes. During the stretch, the Jazz missed 14 consecutive shots. Among the reasons for the comeback was Justise Winslow‘s defensive effort against Donovan Mitchell. Winslow forward made it tough on the second-year star, who finished 8/24 from the field, while the Heat forward closed with nine points and five rebounds.

This is the James Johnson the Heat loves the see. Since returning to the Heat after missing the first 15 games of the season, the forward was passing up open shots, but not this time. Johnson was more confident to take the open looks, with the forward taking a season-high 10 field goal attempts, as he finished with a nine points, two rebounds, and two assists in his 19 minutes. While the stat line may not be impressive, it’s the shot attempts that matter.

Injuries continue to pile up

You can add Rodney McGruder to the latest list of Heat injuries. The forward sprained his ankle in the first period and never returned to the game. He joins Goran Dragic, Tyler Johnson, Dion Waiters, and Derrick Jones Jr. With the injuries continuing to pile up, Miami may have to use its open roster spot to sign a player.

The Heat’s next game will be Tuesday against the Orlando Magic. Tipoff will be at 7:30pm ET.

Is P.J. Tucker on the Way Out of Miami?