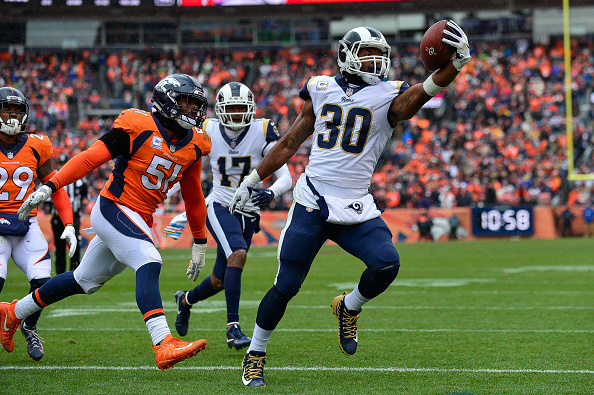 Week 7 in the NFL is upon us, which means major fantasy names will be on a bye. The Pittsburgh Steelers, Green Bay Packers, Oakland Raiders, and Seattle Seahawks all have the weekend open. So here’s a look at some players who can step in for the likes of Antonio Brown, Davante Adams, Jared Cook, and Doug Baldwin in PPR leagues.

2. Melvin Gordon vs. Tennessee-Coming off a season-high 132 yards rushing and 3 touchdowns in Cleveland.

3. Saquon Barkley @ Atlanta-Should earn 10+ snags in Atlanta and against that depleted defense, he could be very deadly touting the rock as well.

4. Kareem Hunt vs. Cincinnati-The second-year standout had 5 grabs for 105 yards and a TD on Sunday night, now finding the end zone 6 times this year. It should continue this Sunday night.

6. Joe Mixon @ Kansas City-This maybe Mixon’s chance to stuff the stat sheet in KC with the Chiefs shaky defenders trying to slow him down.

7. Tevin Coleman vs New York Giants-With Freeman out, Coleman becomes the focal point in the run game, while also making an impact in the passing game.

8. Christian McCaffrey @ Philadelphia-Should get targeted heavily through the air, but not so much on the ground.

9. David Johnson vs. Denver-Thursday night might just be Johnson’s best breakout chance of his underachieving 2018 season so far.

10. Alvin Kamara @ Baltimore-Kamara won’t be running the ball as much with Ingram back, but can easily go off catching balls out of the backfield. Temper your expectations this week on the road against a stingy Baltimore defense.

1. Julio Jones vs. New York Giants-You can count on Jones for 10+ receptions the way he has been on the same page with Matt Ryan.

3. A.J. Green @ Kansas City-The Chiefs defense is struggling mightily and won’t be able to slow down Green for 4 quarters.

4. Tyreek Hill vs. Cincinnati-On fire with Mahomes and expect it to continue with a few deep bombs against Cincy.

7. Mike Evans vs. Cleveland-If he gets covered by Denzel Ward then beware, but Jameis Winston consistently finds a way to target Evans more often than not.

9. Jarvis Landry @ Tampa Bay-Landry is Mayfield’s main target and the Bucs’ defense is trending down towards their awful 2017 form.

10. Robert Woods @ San Francisco-The way Jared Goff is ripping it, Woods and Cooks are must-starts in all formats where they can quickly surpass the 100-yard barrier.

1. Travis Kelce vs. Cincinnati-Since week 1 Kelce has regained his swagger with at least 8 targets and 60 yards receiving every game.

2. Zach Ertz vs. Carolina-The best tight end on a week-to-week basis when it comes to fantasy.

3. Eric Ebron vs. Buffalo-Finally looking like a first-round pick in Indy where Andrew Luck is relying heavily on his tight ends.

5. Evan Engram @ Atlanta-If he returns Monday night as he is thought to, this is a TE1 instantly facing a banged up Atlanta defense.

7. David Njoku @ Tampa Bay-Mayfield and Njoku are starting to hit their stride by connecting on 18 out of 30 attempts in the last 3 ballgames.

8. Jordan Reed vs Dallas-The often-injured veteran saw a season-high 9 targets versus the Panthers last week and will look to build on that.

9. Greg Olsen @ Philadelphia-Getting 5 catches for 50 yards from Olsen on the road is a fair prediction.

10. Cameron Brate vs. Cleveland–OJ Howard or Brate seems to be certain for a touchdown pass from Winston nearly every week.