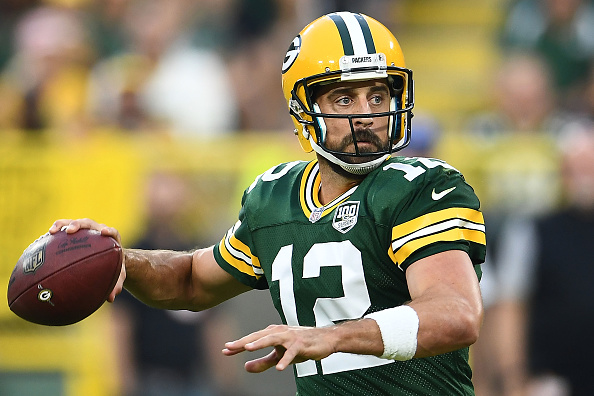 Aaron Rodgers should have won the MVP Award because of how bad the Packers played when he was not on the field.  If that doesn’t show a player’s value to his team, I do not know what does. Anyway, the Packers 2017 should be told in two parts, before Rodgers got hurt, and after. The Packers were 4-1 when Rodgers got hurt, and the fact they went 3-8 the rest of the way, should say everything about who backs him up, and his value to the team. The Packers 2017 story can also be told on how their defense can’t shut anyone down. It’s not that the defense gives up tons of big plays, it’s just that it gives up big plays at the worst possible time.

The Packers strengths are, and will always be, the arm of Aaron Rodgers, who just signed an extension for four years at $134 million. This will keep him in Green Bay until 2023. When he’s not on the field, the Packers are not the same team. After he got injured last season, the Packers season was over as Brett Hundley could not, and should not have been expected to, carry the team the rest of the season.

The Packers have a running weakness, which is their defense. Some days, the defense looks like it can stop anyone. Most weekends, however, they just can’t shut it down when necessary. Although the Packers addressed their secondary somewhat in the draft, they still lost Morgan Burnett who signed with the Steelers. Burnett was a tackling machine in the middle of the field and will be missed this season. They will also need to find some footing in the running game without Aaron Jones for the first two games.

The Packers addressed both of their needs this offseason and improved other areas as well. Starting with the defense, the Packers strengthened their defensive line by signing former New York Jet Muhammad Wilkerson to a one-year deal. Basically, this is a low-cost investment for the Packers. If Wilkerson plays up to his ability, he might be worth an extension. If not, the team can let him go.

In true Ted Thompson fashion, the Packers bolstered their defense through the draft.  They traded up to get cornerback Jaire Alexander from Louisville in the first round.  They used their second-round pick to select Iowa cornerback Josh Jackson, who was still available despite his first round talent.

They also brought back Tramon Williams, who returns to the Packers after two years with Cleveland and one with Arizona.

Ted Thompson has always tried to build the Packers through the draft, and he didn’t just do that for the defensive side of the ball, but the offensive side as well.

The team added depth to their receiving corps by selecting J’Mon Moore out of Missouri, Marquez Valdes-Scantling out of South Florida and Equanimeous St. Brown out of Notre Dame.

Speaking of Notre Dame, the Packers addressed the need for a backup quarterback, just in case, now that Brett Hundley has been traded to the Seahawks for a 6th round pick next year. That person is DeShone Kizer, who the Packers acquired from the Browns. Kizer gives is a different quarterback entirely, with good mobility to go with a strong arm. Truth be told, the Packers hope they will never need him during the Rodgers reign in Green Bay, but better to have a backup.

Rodgers will also have a new target at tight end in Jimmy Graham. Graham is on the back end of his career but gives Rodgers a 6-foot-7 target who caught 10 touchdowns last season, tied for second-most in the NFL with Davante Adams.

The Packers secondary was not very good last season and now they will have to move on without one of their best tacklers. Although the Packers addressed their secondary somewhat in the draft, they still lost Morgan Burnett who signed with the Steelers. Burnett was a tackling machine in the middle of the field and will be missed this season.

Although the Pack drafted a few WRs, they still let Jordy Nelson walk as he signed with the Raiders. While Randall Cobb and Davante Adams are solid, having a veteran like Nelson who can stretch the field is going to be missed.

In all transparency, I have been a Packers fan all my life, but I’ll be the first to admit the Packers defense and Aaron Rodgers’ injury is what led to a disappointing end to 2017 after a very fast start.  If Rodgers stays healthy and has a Rodgers-type season, the Packers will not go 7-9 again. They will play more to how their season started, go 11-5 and fight off the Vikings for the division. The key here will be winning their divisional games because that could mean the difference between winning the division and getting a much-needed bye, or playing in the wildcard round and getting no rest.