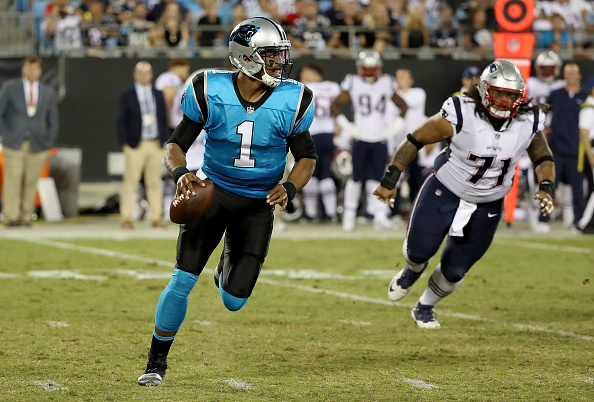 Last year the NFC South was easily the toughest division in football. Will that trend continue into this year? Will the Panthers be able to continue their dominance and make another playoff run? Can Cam Newton get back to MVP Form? Find out my thoughts below.

Since 2013 the Panthers have made the playoffs four times, missing it in 2016. Last year was no exception after finishing the year 11-5. The Panthers were easily in one of, if not the toughest divisions in football last season and still battled through their opponents. Sadly their postseason hopes were cut relatively short after losing to the Saints in the wildcard.

Still, the season was an overall success. After finishing last in the division just a year prior the team was able to show that 2016 was a fluke and they can still be dominant and competitive in the division.

Strengths for this Year

Entering the season the team is returning former league MVP, Cam Newton. While I don’t believe he will be able to return to his 2015 form when he dominated the league and won MVP, he is the leader of the offense and a constant threat of all defenses. The team also has second year running back Christian McCaffery. From all reports coming from camp and the preseason McCaffery is looking for a huge season this year. Expect the former Stanford Cardinal to be heavily used in the passing game per usual but also start to contribute on the ground.

Flipping over to the defensive side of the football, the team still has one of the best linebacking cores in the league. While they may be getting older they are still a very dominant core. Of course lead by start linebacker Luke Kuechly the team should look to dominate the trenches.

Weaknesses for this Year

Perhaps one of the biggest weaknesses entering the season is the teams lack of depth. While the team may look to be loaded in certain areas they also lack the necessary depth required to keep going through any injuries that may happen. If the team suffers an injury they could look to see the whole team start to fall apart. We have seen it before with teams and it could happen with the Panthers team due to their lack of depth in many areas across the board.

Another weakness of the team entering the season is their secondary. This is a team that has to face the likes of Julio Jones, Mike Evans, and Michael Thomas all twice a year. That’s a hard task for any corner to face, let alone the likes of James Bradberry and Kevon Seymour, who are currently listed as the teams’ starters. Throughout his career, Bradberry has struggled and been up and down. This season is a real make it or break it year for the corner. At safety, the team currently has Mike Adams and Da’Norris Searcy as the starters. Adams is currently on the wrong side of 30, entering the season at 37 years old and Searcy turns 30 in November. Overall safety looks to be a huge weakness for the team and will need to have some youth added sooner rather than later.

In the offseason, the team brought in free agent running back C.J. Anderson to help boost the running game. While McCaffery should still be the lead guy, look to see Anderson used a lot with the up the middle runs and as the grinder for the team. Anderson thrives is short yardage situations where he runs through and break tackles up the middle. This should be exactly how Carolina plans on using him. It also should open up the passing game even more for Newton and provide more opportunities for McCaffery as a receiver.

Star tight end Greg Olsen also returns to the lineup after missing most of last season with an injury. Over the years Olsen has been the security blanket for Newton and you could tell the offense wasn’t the same without him last season. On top of that, the team spent their first-round draft pick on wide receiver DJ Moore out of Maryland. Moore should look to make an instant impact on the team and be a top reliable target for Newton. Something that he has been missing for years now.

On the defensive side of the ball, the team also brought in free agent defensive tackle Dontari Poe. Poe spent last season with the Falcons and was fairly productive for the team during that time. He offers an instant upgrade to the position for the Panthers and is the instant starter next to Kawann Short.

This offseason the team lost All-pro offensive guard Andrew Norwell in free agency. Luckily for Norwell, he was rewarded with a five year $66.5 million deal. The same can’t be said for the Panthers, however. The team was left stranded at the position and was unable to find a replacement for him through free agency or the draft ultimately leaving a weakness on their offensive line.

While the Panthers have been able to finish top of the division for many years now it looks like it will be hard for them to repeat. As stated above the team is an injury away from it all falling apart. Still, even if they don’t get cursed by the injury bug they still have a hard schedule to play in one of the toughest divisions in football. The Saints and Falcons look to be atop the division but the Panthers could be trailing right behind them with solid play from the play makers on this offense. The NFC might be extremely hard this year the Panthers could prove some doubters wrong and sneak their way into the playoffs for another year at 10-6.

What Will the Celtics do as the Feb. 7th Trade Deadline Approaches?

A Winner’s Guide to Fantasy Basketball