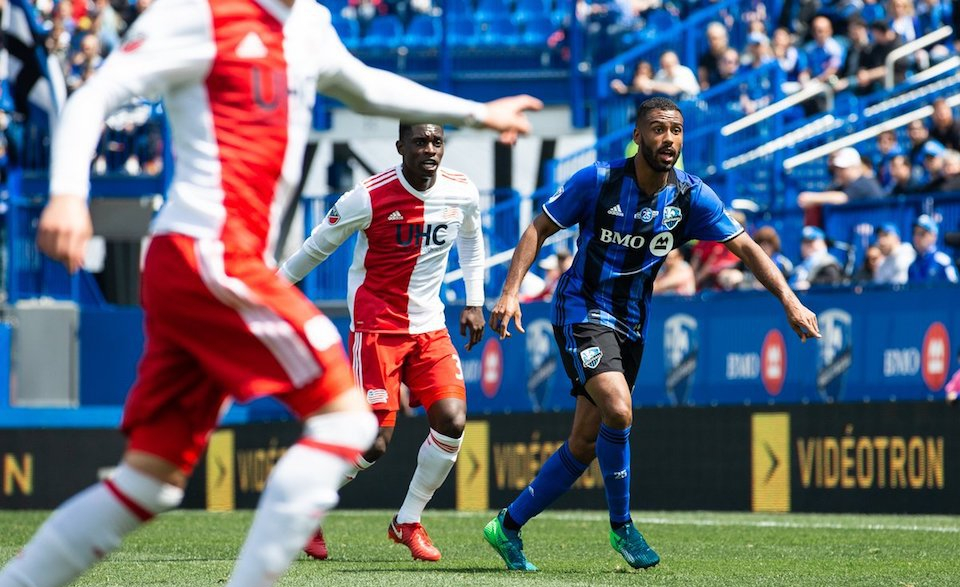 The New England Revolution’s late second-half comeback was not enough to overcome earlier costly mistakes as the Montreal Impact claimed the game 4-2.

After a great start to the game thanks to a strong press, the Revolution went behind just before the first half whistle thanks to a goal from Anthony Jackson-Hamel. Ignacio Piatti played a through ball passed Jalil Anibaba, which sent Jackson-Hamel through on goal. Matt Turner stopped the shot initially, but the ball trickled by and found its way into the net.

The late first-half goal clearly had a great effect on the Revolution going into the break, as the Impact completely controlled the second half early on. Jackson-Hamel scored his second goal of the game in the 52nd minute after Piatti beat Andrew Farrell and Anibaba to open up space for the 24-year-old striker to make it 2-0.

Montreal continued their second-half dominance with a third goal in the 65th minute from Raheem Edwards. Piatti earned his third assist of the game after Revolution lost the ball around the midfield mark. The 33-year-old playmaker sent a through ball down the right-wing which Edwards picked up, beating Gabriel Somi and Claude Dielna with his pace, before slotting home the goal.

Piatti completed his stellar performance by adding a fourth goal for Montreal in the 68th minute after beating Dielna and Anibaba to a long ball. The Argentine was subbed off in the 75th minute, capping off his 100th MLS game with a goal and three assists.

Following the fourth goal, head coach Brad Friedel breathed some life into the team after taking off Somi and Farrell, replacing them with Kelyn Rowe and Brandon Bye.

The Revolution briefly staged a comeback late in the game thanks to two goals from Wilfried Zahibo. The first goal came in the 78th thanks to a towering header off of a corner to make it 4-1, which was then followed by a side volley in the 86th minute to make it 4-2.

.@Zahibow gets on the end of a @DiegoFagundez14 corner to put the #NERevs on the board pic.twitter.com/OrKMeVYZsF

What a goal from @Zahibow to pull the #NERevs within two pic.twitter.com/jOrbBPwBLO

Agudelo injury concerns- Revolution fans held their breath in the 32nd minute when Juan Agudelo went down with a non-contact injury. He was replaced by Krisztian Nemeth shortly after. Agudelo’s injury is reported to be a hamstring injury but no details have been released yet on the severity of the injury. The 25-year-old has one goal in eight games this season and has struggled with injuries in the past. Agudelo’s absence would not hurt the team as much due to Teal Bunbury’s recent good form, but another long-term injury could be another big setback in Agudelo’s career that has been plagued with injury.

Backline still has weaknesses The Revolution were one of the hottest teams in the last couple weeks, with their backline line partnership of Dielna and Anibaba earning lots of praise. However, this game showed that the Revolution defense still has a long way to go. Dielna and Anibaba made multiple costly mistakes which put the team in tough spots and Somi continued his questionable form. A shakeup in the backline actually helped the Revolution improve in the game and I wouldn’t be surprised if Friedel makes changes prior to the next game.

No giving up- Last season when down 4-0, Revolution fans would not expect much from the team. Under Friedel however, the team has shown much more resilience and fight late in games, even when the scoreline looks too daunting to overcome. Despite trailing by four goals, the Revolution battled back and scored two late goals and continued to threaten until the final whistle. While the comeback may have fallen short, it is important to see that the team can hold their heads high and push until the final whistle.

The Revolution are in action again next Saturday, May 12 against the defending MLS Cup champions Toronto FC. Kickoff in Foxboro is scheduled for 7:30 p.m.