Are Marchand’s Rat Days Really Over? 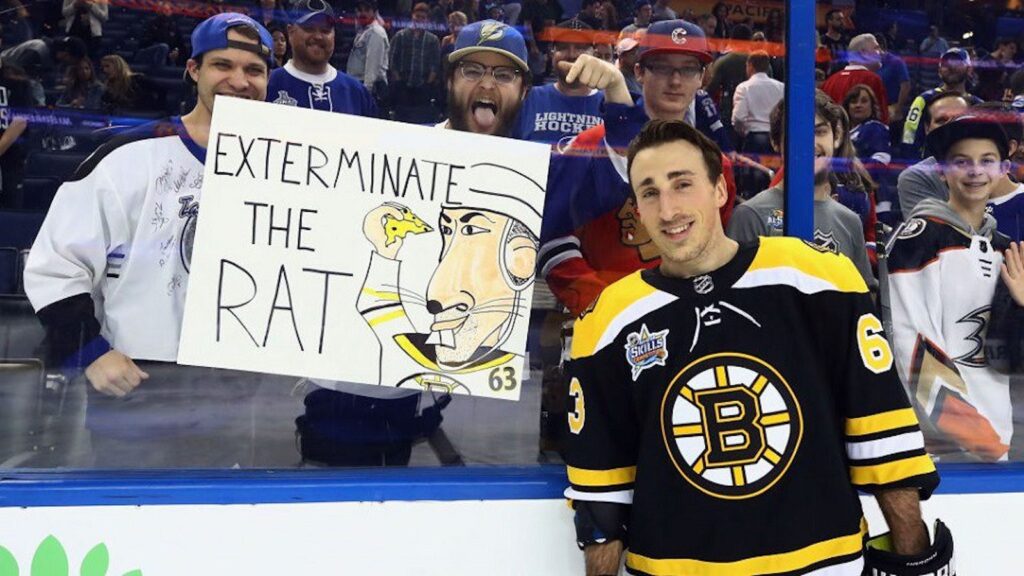 The saying goes ‘once a rat, always a rat,’ and that just may apply to the problematic favorite that is the Bruins winger Brad Marchand.

Marchand, one of the team’s constant leaders in scoring, was suspended for five games last week after elbowing Marcus Johansson of the New Jersey Devils in the head. He will return to the ice on Feb. 7 against the Rangers, while Johansson will not see the ice anytime soon. The New Jersey player was recovering from his first concussion when Marchand’s elbow found its way to his head and has been played on injured reserve since the incident.

While Marchand already has 21 goals in 38 games, he still lives up to the reputation of being a dirty player that has plagued his career as a Bruin. Though every season, Bruins brass and fan base alike hope he has finally left it behind him.

Marchand made his name in the league by being the dirty, pesky player with the Bruins in the early 2010s. Often the player to draw pointless penalties and blatantly chirp to the point of harassing the other team, Marchand—along with a distinctively large nose to add to the image—was deemed a “rat” by many players and spectators.

His reputation for being a pest quickly grew. At the end of his second season, on the Bruins’ visit to the White House to celebrate the Stanley Cup, President Barack Obama referred to Marchand as “the little ball of hate.”

At that point, Marchand had barely proven himself as an offensively skilled star; his career high for goals was a mere 21 goals at the end of the 2010-2011 season. He had also only been suspended once, in March of 2011. Both of these aspects would continue to grow more abundant over the next seven years.

Now Marchand has faced five suspensions, including this one, and three separate fines. All suspensions have been for what is deemed “dirty” plays in hockey; elbowing (two counts), low bridging (hitting a player at their knees and flipping them), slew-footing, and clipping. The three fines are suspect at best; a slew-foot worth $2,500, a $5,000 roughing call, and a $10,000 trip.

Who’s to say there won’t be more?

Well, Marchand, certainly. During this trying part of the season, the left winger expressed regret for his actions and how his punishment impacts the team when he is out of the lineup. But this incident with Johansson—though Marchand attests that it was accidental—has illustrated that those words aren’t enough to stop Marchand.

Although he was suspended, Marchand was allowed to participate in the NHL All-Star Weekend in Tampa. At one point in the skills competition, a Tampa Bay fan held up a sign reading “EXTERMINATE THE RAT” with a picture of the Bruins winger eating cheese. Grinning, Marchand took a picture in front of it, and then later in the game proceeded to blatantly fake an injury for a moment before returning to play.

We can muse every time that he gets a suspension that hopefully it’ll be his last with a lesson learned, but maybe not even Marchand himself can know for sure. Though he doesn’t always express deep regret for his recklessness, he does acknowledge that they happen. At least Marchand has done the first step to self-repair by acknowledging, however humorously, there is a problem.